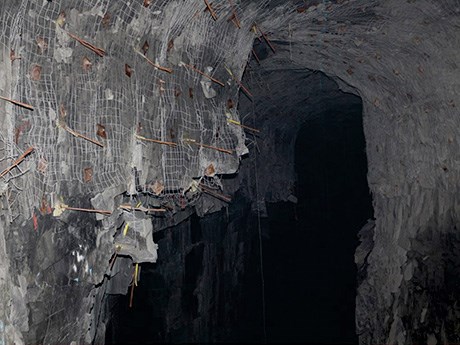 Before: This photograph shows obvious overbreak with damage to screen and bolts owing to a pattern that was too tight (blastholes too close together).

Aegis Break Analyzer, software to optimize mine drilling and blasting, developed by iRing Inc. of North Bay, was used to design the best blasting pattern for an underground stope at Goldcorp’s Éléonore gold mine in northern Quebec. At a mine in Chile, Aegis was used to identify the optimal design for blasting with ANFO explosive.

“It’s a tool that allows a mine to really do extensive cost analysis and performance analysis,” said Chris Preston, a professional engineer and iRing’s vice-president of research. Blasting operations designed by Aegis Break Analyzer can diminish reliance on expensive underground crushers as the main means of delivering fragmented ore to a mill or drastically reduce the cost of crusher operations, providing considerable savings, iRing predicts.

Preston said the breakthrough for this new technology is the ability to quantify the energy of an explosive in two parts - the shock that’s produced by the explosive and the gas expansion of the heave that propels ore fragments out so they can be easily mucked.

He explained some of the calculations involved in designing drilling and blast hole patterns. “Somewhere in between the hole and the free face, where the stress wave bounces back, there is a distance that is optimized for the fragmentation level that the explosive and rock combination is set for,” he said. “We were able to quantify that and create a table that said, ‘Look, if you’re not in this range your blast is not going to come out the way you expect.’ So it permits an ability to actually get the pattern design and the rock combination right the first time for the best fragmentation level.”

At the Chilean mine, the blasting solution for ANFO was quickly calculated. “We were able to zero in on the pattern within 20 minutes and that permitted them to take a look at what kind of fragmentation and what kind of dilution and recoveries they’re going to get with the product,” Preston said.

At the Éléonore mine, the goal was to use explosives to protect the hanging wall and foot wall and reduce the dilution of ore with waste rock to 10 per cent or less, Daniel Roy, an engineer and blasting expert with the engineering consulting firm BBA, told a May conference of the Canadian Institute of Mining, Metallurgy and Petroleum in Vancouver.

“Given that the mine does not have a primary crusher underground, the fragmentation had to be less than 400mm, the opening dimensions of their grizzly,” Roy reported. BBA analyzed various factors to determine the optimal burden and spacing for drill holes and monitored the two blasts required to extract the entire stope. “As a result of these steps, the blast fragmentation was impeccable throughout the mucking process. The stope was excavated under the barrier of the coveted 10 per cent dilution.”

Successful blasting is music to Preston’s ears. He recalls that as far back as the 60s, when he started his career at Queen’s University, there was always a quest to find the magic combination of rock, explosives and drilling to break an orebody or quarry rock to a specific size for material handling equipment.

“If you use our product, there’s a good chance you can ameliorate the cost of a crusher underground. You may (even) have the ability to price a mine out without having one,” Preston said.

Aegis Break Analyzer will save money when designing and planning blasting. “You’ll get to the design a lot faster than you were able to do before,” Preston said. When it’s time to contract for explosives, mining companies can compare the cost and performance of different explosive products.

iRing is promoting the new software during field visits with three distributors to various mines in Africa. Australia is also on an itinerary intended to bring mining operations up to speed on the new technology.

The company’s earlier products, Aegis Designer and Aegis Analyzer have been well received by the industry, Preston said. Aegis Designer plots blasting drill patterns with lightning speed while Aegis Analyzer predicts the effects of blasting and allows fine-tuning of blast designs. Mine designers across Canada and in Australia, Africa, Peru, Asia, Mexico and Europe are using Aegis software.

iRing is also encouraging the educational use of its products. “We just sent out a notice that we’re going to be offering the break module at a very reasonable price for universities and colleges so that potential mining engineers and technical people can get trained on ring design in underground mines.”