Digital mining is here to stay, but there are some challenges

Digital mining is here to stay for Canadian mining companies but there are still some challenges to be overcome.
0
Apr 12, 2019 2:28 PM By: Len Gillis 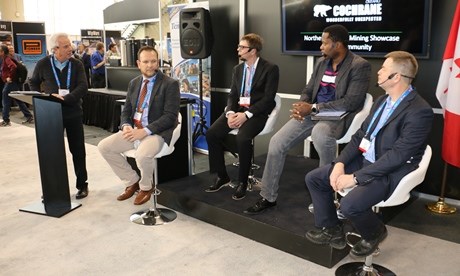 CBC Host Bob McDonald, at left, moderated a panel discussion at the annual convention of the Prospectors and Developers Association of Canada (PDAC) held in March. The panelists, from left to right, were Ethan Hull, CEO of TECHrep Global; Michel Samovojski, technology co-ordinator for the Canadian northeast district of Goldcorp; Theophile Yameogo, vice-president of digital innovation at Dundee Precious Metals; and Chris Burgess, director of innovation and transformation at Yamana Gold. The panel discussion was organized by Maestro Digital Mine company of Sudbury to discuss the state of digital mining in Canada. LEN GILLIS / Sudbury Mining Solutions Journal

Digital mining is here to stay for Canadian mining companies but there are still some challenges to be overcome.

That was the consensus of a group of mining executives who took part in the panel discussion hosted by the Maestro Digital Mine company of Sudbury at the annual convention of the Prospectors and Developers Association of Canada (PDAC) held in March.

The event was one of the key presentations at the Northern Ontario Mining Showcase and was moderated by Bob McDonald, the well-known hosts of CBC Radio’s Quirks and Quarks science program.

The panelists were Ethan Hull, CEO of TECHrep Global and former IT manager of Barrick Gold; Michel Samovojski, technology co-ordinator for the Canadian northeast district of Goldcorp; Theophile Yameogo, vice-president of digital innovation at Dundee Precious Metals; and Chris Burgess, director of innovation and transformation at Yamana Gold.

McDonald’s first question to the panel was straightforward.

“Why go digital,” he asked.

“The biggest thing is the data. Data is the gold of the future. And we have to have as much as we can as real time as we can to make real time fast decisions,” he said.

Historically, said Hull, the mining industry has lagged behind of connecting means of production with computers that log, measure and record every ton of ore that is drilled, blasted and mucked.

“So we need to digitize in order to get some meaningful data that can help us increase safety and production,” said Hull.

Joining in on that thought was Samovojski  who  said any company that buys new equipment now will  find it is set up to produce more instant data for the user.

Just as importantly said Samovojski, companies will need to develop a good strategy on how to manage all the new data because in the coming years it will increase significantly.

“We will have so much data we will need to take care of it.”

“Ultimately it is to create value, right? Is this going to make us more profitable, yes or no?” he asked.

At that McDonald asked for some real life examples of how digital is at work in mining.

Yameogo said not waiting for monthly paper reports was one thing his company moved forward on.

“Why should we wait until the end of the month to know what’s happening in the mine?” he asked.

“So we put Wi-Fi underground, all over the place.”

Yameogo said this meant that his company could know instantly what was happening underground, it could get real time reports on the work being done and actually call up and speak to somebody that was underground.

Another question focused on the actual use of robotics underground.

“We partnered with a company from the U.S. that has an AI drone (artificial intelligence). So basically a drone that thinks by itself,” said Yameogo. He said the drone is used for high-resolution mapping of underground venues such as block cave stopes while at the same time reducing risk for the workers.

“So we partnered with a company called Exyn (Technologies) out of the U.S. They know nothing about mining. But they have technology and the drone flies itself and then comes back to where it is supposed to be,” he said.

The other panelists remarked that automation and robotics is quickly becoming the norm in the mining community.

Samovojski gave the example of using a Maestro Digital Mine solution to implement continuous underground remote mucking at the Goldcorp Borden Mine so that work goes on for those times between shifts when the workers have gone to surface for shift change.

Hull said for his company it required a new communications plan from top to bottom, along with getting people to accept change, and making sure the new technology could interface well with the older technology.

“We boiled it down to use, usefulness and what are they used to,” said Hull.

Yameogo said one of the pitfalls of changing technology is that is must be as people friendly as possible so that workers can adapt and accept the change.  He said a change management process is not always the answer.

“None of us have ever gone through a change management for how to use Amazon and buy stuff online,” said Yameogo.

Burgess said some companies would need a “hybrid strategy” to allow for workers of different age groups to cope with new ways and new technology.

He said it can be a challenge for workers in their fifties and sixties.

“You know some people get it, and they grasp it and run with it. And some people, not,” said Burgess.

When asked to define some success, Hull mentioned that his company had a new mining system that included a 160-page manual. He said the company’s immediate reaction was to figure out how to make the instructions more intuitive.

He said the miners were able to increase their man-hour production by one half hour of active mining.

“That equated to 400 extra tonnes a day at that underground mine. And it’s quarter ounce dirt (gold ore) and that equated to about $40million a year,” said Hull.

Soon after that, he said, the work became intuitive.

Burgess commented that one of the benefits of digitization is that management is getting better insight on the results of their decisions and how much work is getting done.

Yameogo said there is a time saving for many jobs, but it is not all about immediate profits.

“We took so many hours off people’s jobs. We didn’t fire anybody. But it allowed people to have higher assurance of what they’re doing,” he said.

“Our goal is really to reduce the time to do something; reduce the cost if necessary, but focus on health and safety,” he continued.

If there was any controversy at the panel discussion it came from a member of the audience asking a question about people falsifying data.

Former Vale executive Alistair Ross asked “How do we overcome our history of lying?” in a digital setting. By example, Ross said management would get reports that so many bags of shotcrete had been applied, yet the company knew that not that many bags were purchased. Or that a certain number of rock bolts had been installed, yet a count would show that not to be true.

“And it’s all tied to bonus systems and incentives for the workers, and I am just wondering if you have any experience?” Ross asked.

Hull said he was indeed aware of how the deceit happens and said the only way to fix it is at the very top of mine management learning to accept the accuracy of true production figures from data that had not been embellished to make the mine performance look good.  Hull said one way to overcome the problem is to set up data reporting from the actual mining equipment right into the mine data base.

The final part of the discussion was on the importance of having data security, some sort of reliable system that would save and isolate important data in the event of a system crash or deliberate cyber-attacks.

Yameogo said it has to be assumed that all data systems will eventually crash or experience temporary failures, and it is important to have solutions and strategies in place for the day that happens.