Premier Mining Products of North Bay is winning positive reviews for its compact, cost-efficient, and environmentally friendly C100 water and solids separator for core drilling.
May 23, 2016 10:00 AM By: Sudbury Mining Solutions Journal 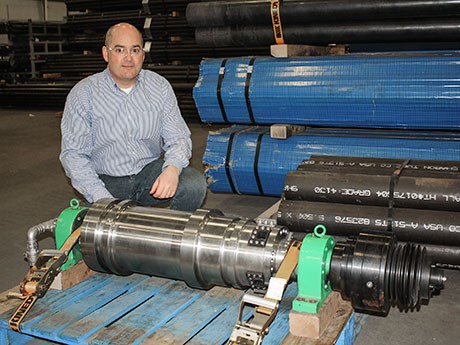 “It’s ideal for small, environmentally sensitive drilling operations that are often in remote areas,” said John Daniels. “You get a lot of recycling happening in a very small space with very little water used. If you go to a place like Sudbury, you are limited in how much water you can take out of the water bodies per week, so you don’t want to use too much or you could be forced to stop drilling.”

The C100 centrifuge, which measures 4 feet by 7.5 feet, is easy to transport to small remote sites via a small helicopter, and requires about half the set-up space of the traditional centrifuge. All of this lowers costs, notes Daniels. The system is also simple to assemble.

The brain of the centrifuge is a programmable control panel the size of a small kitchen cupboard.

The C100 runs on either electric or generator power, recycles more than 95 per cent of the drilling fluid and reduces the total volume of waste. Huge ponds used to settle the cuttings are not necessary. Instead, the fluid from the drilled hole is pumped through the centrifuge.

“The gravitational pull on the cuttings at the bottom of a settling pit is the equivalent of one G-force…but the C100 when it’s spinning can generate 2500 Gs,” said Daniels. “That means a lot of separation in a very small space, so instead of using thousands of gallons of water (from ponds), we can run a whole drill site on 200 gallons. We just keep pulling out the cuttings and recycling the water down the hole. We get the centrifuge spinning at 3500 rpm’s, pump in the dirty water and the centrifugal force sends the water and cuttings to the outside of the bowl. An auger pulls the cuttings away and sends them flying into a containment box outside the bowl while the water flows freely and gets recycled. Cuttings can then be bagged. Our pond – instead of being in the ground – is now in that bowl,” explained Daniels. “The bagged cuttings can then be sent to a mill to have the minerals extracted.”

Premier Mining also offers an S750 Shaleshaker centrifuge (5 feet by 9.5 feet in size) for drilling jobs that have a lot of sand at the top of the hole. The water is dumped onto a fine mesh screen and, like a vibrating table, removes all of the course sand and bags it. The Shaleshaker runs on 400 gallons of water.

“Mining companies want to be seen to be doing things that are environmentally responsible, and that’s where we come in,” said Daniels. “One of our drilling customers has been hired by a mining company specifically because they have this technology.

“Some companies use the C100 because they want the cuttings, while others use it to avoid effluent flowing off their drill site, but overall, drillers are facing more restrictions on water use and that makes this product so appealing.”

There are currently 11 units in operation in Canada.

Daniels said it’s been a challenge starting up during a downturn in the mining market. However, he is optimistic the company will hire 20 to 30 employees once the mining industry improves. Response to the C100 at the recent Prospectors and Developers Association of Canada (PDAC) trade show was encouraging, said Daniels.

To view a video of the C100 and Shaleshaker in operation visit: http://www.premiermining.com/node/135