Liquid air –Holy Grail for the mine of the future? 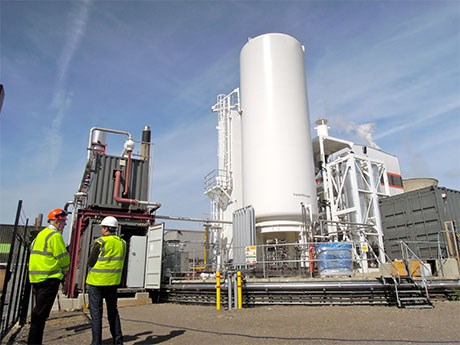 Compressed and stored in low-pressure tanks, liquid air has the potential to revolutionize mine design, said Cluff, who has a PhD in Mining Engineering from the University of Exeter’s Camborne School of Mines in the U.K.

Liquid air, says Cluff, is a chilly minus 190 degrees Centigrade, so instead of cooling ventilation air on surface or sending cold water deep underground, Cluff advocates sending liquid air down an insulated pipe. Returned to its gaseous state and mixed with the ventilation air, it can provide the cooling necessary to offset the high temperatures in deep mines.

There’s nothing complicated about liquid air, claims Cluff. “All of the equipment, all of the technology and all of the components are already well understood.” It’s also cost-effective because it can reduce the volume of ventilation air required and does away with the cost of pumping water used in chilling plants back to surface over the life of a mine. In its gaseous state, it’s simply exhausted back to surface through the ventilation system.

Liquid air can be produced and stored during operation of the wind turbines or during daylight hours.

“Microgrid systems across Northern Canada will significantly benefit from using wind turbines with liquid air energy storage because it smoothes out the power,” said Cluff. When the wind isn’t blowing, you use the stored energy.

Instead of producing ore, you’re producing energy,” said Cluff. “It changes the end use of the property.”

As the percentage of renewables on the grid increases, the need for storage also increases, he noted.

Cluff cites the 300 kW Highview Power Storage pilot plant in Slough, just west of London in the United Kingdom, as proof that the technology works. The Highview plant uses ambient air and electricity to produce liquid air, which is then stored in an insulated tank at low pressure.

“When power is required, liquid air is drawn from the tank and pumped at high pressure to a heat exchanger, where the addition of heat turns the cryogen into a high pressure gas,” explains Cluff in a paper delivered at the Deep Mining 2014 conference in Sudbury. “The low temperature of the cryogenic fluid allows for ambient temperatures to be a sufficient heat source, but the addition of even low-grade waste heat readily causes a rapid expansion of the fluid to a gas, with an increase in efficiency.”

The high-pressure gas is then used to drive a turbine and generator to produce electricity.

Two remote mines in Canada are already using wind turbines to supplement diesel generation: Glencore’s Raglan Mine in Northern Quebec and the Diavik Diamond Mine in the Northwest Territories, jointly owned by Dominion Diamond and Rio Tinto.

Raglan has opted to use a hydrogen energy storage solution, but Cluff maintains that liquid air would be much more versatile solution.

The Dearman engine, currently in development in the United Kingdom, is fueled by liquid air and is projected to be on the street by 2016 or early 2017, he noted. Once perfected, it can be used to power mobile mining equipment. Hydrogen, by contrast, is problematic.

“If you are going to use hydrogen to run vehicles underground, you are going to run into problems because the energy density is just way to high,” said Cluff. “Hydrogen has approximately 120 megajoules per kilogram of energy. Methane has 55 megajoules per kilogram, so hydrogen has twice the explosive power as methane and I don’t think it’s a good plan to be storing high-pressure hydrogen anywhere underground or use it in any way, shape or form to run your mine vehicles. For liquid air, the risk factor is so low and the return is so great, it’s a no-brainer.”

Liquid air also has advantages over the use of battery-powered vehicles, said Cluff, because it’s a pumped fuel like gasoline, which we’re all familiar with “so you don’t have to go somewhere and charge it up for eight hours.”

But the best thing about the Dearman engine is the exhaust, or lack of it.

“Imagine driving around in a vehicle where your exhaust is cool air – it’s a dream come true for mine ventilation engineers,” said Cluff.

Leveraging the R&D being done in the U.K. and applying it to the mining industry will require buy-in from one or more mining companies and some funding, but Cluff is convinced that liquid air is the perfect solution for both deep mine cooling and energy storage.