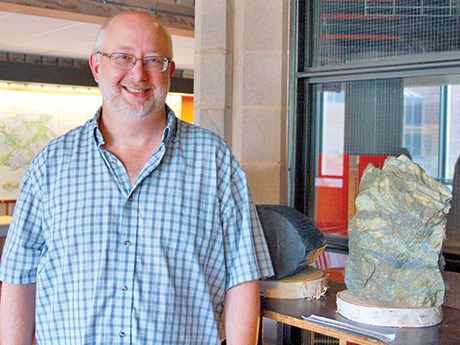 Peter Hollings, head of geology at Lakehead University. Lakehead’s involvement with the latest AMIRA international research project will build upon past research focused on detecting geochemical signatures of alteration halos.

“We know that certain minerals show geochemical trends around ore deposits, and that big ore deposits have a different signature compared to smaller ore deposits,” said Dr. Peter Hollings, director of the Centre of Excellence for Sustainable Mining & Exploration (CESME) and chair of the Department of Geology at Lakehead University in Thunder Bay.

“Although with the visible footprint (of a deposit) we could see was maybe a kilometre, looking at the mineral chemistry we can actually see changes in the rock maybe three kilometres and in the case of some of the really big porphyry deposits in Chile, maybe as much as 10 kilometres. So we’ve made a bigger target for companies to aim for,” Hollings said.

A new AMIRA project named P1202 “Far field and near mine footprints – finding and defining the next generation of Tier 1 ore deposits” launched immediately after P1153 as the next in a series of related projects. If successful, the research could pave the way to a more effective way of finding drilling targets at a lower cost.

Automation of data analysis is helping to reduce the cost of laser ablation, eliminating the need to analyze data by hand.

“It takes out a lot of the human error potential and speeds up the process, reducing the cost of doing that work,” Hollings said.

New tools include hyperspectral infrared (IR) imaging, which measures the reflective responses within a core sample to determine the minerals present. A full core scan allows you to see how the downhole variation of the alteration changes. The handheld IR units tend to be of lower resolution than full core scanners, with magnification similar to a hand lens, Hollings said.

Both IR and laser ablation work on the same principles to examine the mineral chemistry of alteration halos. Laser ablation is more precise than IR but IR is less expensive, and the information gleaned might be all that is needed for exploration.

“You’re getting a much more empirical description of your alteration,” Hollings said. “If I put the same box of core in front of five different geologists, I’d probably have five – maybe more – descriptions of the alteration. They’d all be close, but they’d all be slightly different due to human nature and subjectivity.”

The research, which receives funding from 11 industry partners, will also investigate how the technique works in other geological systems. “Rather than just the porphyry systems that we’ve looked at a lot, we looked at Hemlo and Red Lake to see whether the same things worked around orogenic gold systems, and it looks like they do.”

Fieldwork is or will be taking place in several locations in Canada as well as Arizona, Australia, Sweden, Indonesia, Chile, and Argentina. That presents an incredible opportunity for students at Lakehead University. Hollings said that smaller schools such as Lakehead offer more research opportunities for undergrads. Conversely, graduate students can sometimes lose out on certain opportunities such as working on advanced equipment only available at larger programs.

This series of research projects has allowed grad students at Lakehead the best of both worlds because, through the AMIRA partnership, they travel to the CODES (Centre for Ore Deposit and Earth Sciences) at the University of Tasmania for a month of analysis work on the big equipment.

“They work with the research team there and actually collect their own data. It’s important to see how the method works and to understand the process,” Hollings said. “It’s a really positive experience for them.”