Mining suppliers use state-of-the-art technology for product design and development ICAMP, a unique innovation centre established at Canadore College’s trade campus in North Bay two years ago, is expanding due to overwhelming support from the manufac
0
Nov 17, 2015 11:00 AM By: Sudbury Mining Solutions Journal 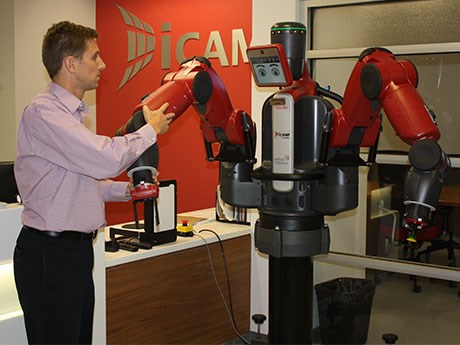 Evan Butler-Jones, applied research lead with ICAMP. The innovation centre in North Bay helped to create 57 jobs in its first year of operation.

ICAMP, a unique innovation centre established at Canadore College’s trade campus in North Bay two years ago, is expanding due to overwhelming support from the manufacturing industry. The Innovation Centre for Advanced Manufacturing’s newest incarnation, promoted as ICAMP 2.0, includes the purchase of a 3D metal printer, design simulation software and equipment to support and enhance some of its existing technology.

ICAMP provides product design and prototyping for manufacturing companies across Northern Ontario. Walk into this 8,500-square-foot innovation centre and a human-sized smiling robot called Baxter greets you. Upon further exploration you find a laser scanning system, simulation software, a 3D theatre and 3D printer, as well as a CNC milling machine, a scanning electron microscope and a water jet cutter.

Since opening its doors in late 2013, response from the manufacturing industry has been tremendous, according to Evan Butler-Jones, ICAMP’s applied research lead. “This centre has provided industry with ways to access new manufacturing technologies that are too expensive, too complicated, or that they just couldn’t justify buying on our own,” he said.

One has only to look at the numbers to see that ICAMP is quickly turning into a success story. It surpassed its three-year economic development target (based on government funding requirements) in the first year alone. “The companies that we have been working with have told us we were part of helping them create 57 new jobs and retaining 16 in the first year of our operations,” said Butler-Jones. The target over three years had been set at 40 jobs.

ICAMP 2.0 is offering additional new technology based on input from the manufacturing industry. “We heard that our 3D printer (used to create components and parts) is great, but it only prints plastics, and mining supply parts are formed with metal,” said Butler-Jones. Now, manufacturers can do testing first with the plastic printer and then print the final product in metal.

The 3D metal printer lays down a very thin layer of metal powder, following which a laser melts the powder into the shape of whatever has been programmed into the printer. A variety of metals can be used. The computer control aspect is the key, according to Butler-Jones, because it would be impossible to do such intricate design work manually.

Another benefit for manufacturing companies that use ICAMP is the time they are able to save. “Often, they are in a time crunch when it comes to getting parts. Here, they can just send us the digital files and we can make one overnight!” said Butler-Jones. If the part works, the company can make the investment to have more parts made and money isn’t wasted creating different designs or waiting for development. “We can make revisions quickly if something doesn’t work, so the company can shorten the process significantly.”

There are several companies in northeastern Ontario that have already benefitted from ICAMP. For example, Drillco is a new North Bay mining supply company that is creating a very versatile and unique diamond drill (see Drillco article, Page 25.) The company has been developing a prototype and had to test out many different components to make sure they would fit.

“We did a 3D scan of a giant gear box and modeled the scan so that Drillco could bring that part into their design and know that all the parts are going to fit without having to guess, or physically doing it. They could do it in the design and know that by the time they get to production it’s going to work. It’s amazing. And now we are looking at helping them with 3D printing,” said Butler-Jones.

Another company that has benefitted from ICAMP is North Bay Machining Centre, a custom production and machine shop that supplies machine components to the exploration and mining industry. This company wants to advance to a higher level with 3D design components, so they can do more complex shapes and curves that come from a 3D model. Working with ICAMP allows them to do test runs to determine the quality of the end product.

“We are in no way trying to take over doing their work. We are here to enhance what they do and help them move forward,” emphasized Butler-Jones.

Businesses that use ICAMP pay a fee to help cover costs. That allows the centre to continue to update and purchase new equipment. But because the service is run through a college and includes research, there is often government funding available to businesses to assist them in using the ICAMP facilities.

“We are really looking at taking it to the next level in terms of what we can do for design and prototyping,” said Butler-Jones. These design tools will expose companies to how these technologies are being used, where they’re being used, and how they can benefit. ”