Insolvency proceedings put acclaimed biomining project and pilot plant on the brink of extinction
Apr 17, 2021 8:45 AM By: Ian Ross 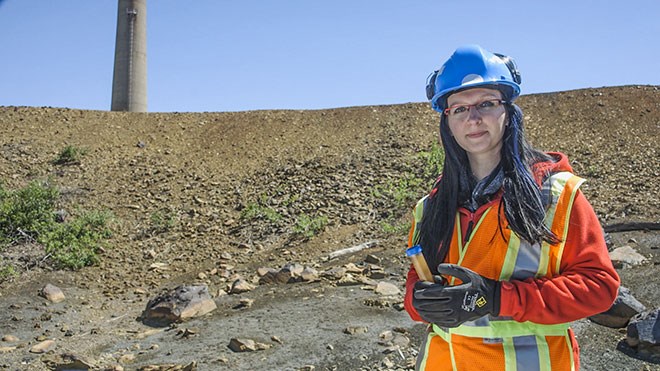 One of the world's top experts in mine waste cleanup was one of the casualties of the massive and deep program and job cuts at Laurentian University this week.

Dr. Nadia Mykytczuk, highly regarded as a microbiologist in bioleaching and mine remediation, was among more than 100 faculty and staff who received virtual pink slips on April 16 as part of the ongoing insolvency proceedings at the Sudbury university.

Laurentian's School of Environment at its Vale Living with Lakes Centre took a major hit among the 58 undergraduate and 11 graduate programs cut.

Mykytczuk, an environmental microbiologist, manipulates tiny microbial bacteria in her Sudbury laboratory to produce a cost-effective and green alternative to deal with high arsenic concentrates in mine tailings, rendering them safe and benign, while extracting the valuable minerals from the waste material.

Well-known by mining companies in the Sudbury basin, Mykytczuk has gained the most acclaim for her work in South America in a partnership with Toronto's BacTech Environmental.

She's finetuned a proprietary bioleach processing technology for the company to process concentrates produced from historic mining operations to recover valuable metals like gold, silver and copper in an environmentally friendly way, instead of resorting to crude and toxic methods of smelting.

Her foot soldiers are the naturally occurring bacteria in the tailings that are cultured to eat up the sulphides and release the valuable metals while leaving a stable form of arsenic on the back end.

But sitting as an NOHFC Industrial Research Chair in biomining, bioremediation and science communications didn't insulate Mykytczuk from being among more than 120 terminations among faculty and staff.

"I'm not giving up on anything," said Mykytczuk in explaining her steely resolve to help rebuild the environmental programs that were terminated.

John Gunn, director of the Living with Lakes Centre, regards Mykytczuk as one of finest young scientists in the world working on mine cleanup.

He's not pleased that Mykytczuk was one of the many researchers "thrown under the bus" as a result of the Companies' Creditors Arrangement Act (CCAA) process.

Gunn calls her a "superstar researcher" with a magnetic personality and an impressive body of work that's become an international drawing card for environmental studies at Laurentian.

"That is Nadia. She's a powerful attraction to young people," said Gunn.

"You put that person at the front of the room and every kid who would never want to clean up mine waste says, 'maybe mining is something I would like to do.'"

The broad-axe approach to the cuts taken during the CCAA process has left Gunn mystified and disillusioned, but also filled with determination that the Living with Lakes Centre will survive in some form, in some fashion.

Since Living with Lakes opened in 2011, Gunn said the centre has largely been a self-sustaining institution, estimating it's attracted in the range of $30 million to $40 million in research funding. The modern two-storey steel and glass research building on the shores of Lake Ramsey is a multi-disciplinary lab and workspace that produces solutions for distressed aquatic ecosystems.

One of its tent pole projects is Mykytczuk's proposed Centre for Mine Waste Biotechnology, a commercial offshoot of her work that would serve as a Sudbury-based research and commercialization hub.

The trial phase of this research involves a small desktop plant, currently housed in an applied research lab across town at Cambrian College. A 12-month study was conducted on tailings material extracted from Ponce Enriquez, Ecuador.

Mykytczuk said the test results so far have been "fantastic" as they were able to stabilize over 99 per cent of the arsenic material. But they've only managed to achieve 80 per cent on the gold recovery side, a yield she would like to improve upon. The pandemic has made it difficult to run the next campaign.

Her team is still hopeful to get more material shipped up from South America to run larger scale experiments.

The next logical step is to scale up to a proposed one-tonne-per-day pilot plant that would be built at a brownfield site in Coniston in Sudbury's east end.

A feasibility study on the centre was nearly complete in February when everything was paused as Laurentian entered CCAA proceedings.

Though the report and business case were not yet complete, Mykytczuk said everything was looking very positive. "The preliminary findings are that the community and industry are supportive of the idea and it will be well positioned in Sudbury."

Many global mining, energy and resource extraction operations are quickly adopting new sustainability values to have a zero carbon footprint on all their activities, especially in waste disposal. Sudbury nickel miner Vale vows to be net neutral by 2050.

Gunn regards mine waste remediation as ushering in a new era in Sudbury's mining legacy and furthers its world-renowned regreening efforts.

Commercializing Mykytczuk's research would certainly resonate with many Sudburians, considering the negative environmental impacts of the mining legacy in the historic Sudbury basin.

The arsenic-leaking mine tailings at the controversial former Long Lake Gold Mine in Sudbury's south end contains about $13 million worth of gold. The mountainous tailings near Vale's Copper Cliff smelter, a landmark monument to more than a century of Sudbury mining,  holds $7 billion to $8 billion worth of nickel.

"Bioleaching and bioremediation is what we propose with that new industry," said Gunn.

This centre of excellence, he said, would incubate new ideas, new expertise and new ways of processing that would attract companies to Sudbury.

"With biotech and mine waste cleanup, we don't know yet what technologies will come off of that," said Gunn."But it will be many."

He believes it would be a job-creating "mecca" for Sudbury, employing hundreds initially and perhaps thousands later, on par with the growth of the city's mining and service and supply community in the 1990s and early 2000s.

Mykytczuk's research effectively closes the loop in the mining cycle, he said.

"This cannot be destroyed by the actions of the university. That dream is still intact."

Mykytczuk also plays an instrumental role in the ongoing efforts to regreen Sudbury, a homegrown academic knowledge base that the university and the City of Greater Sudbury has sought to export to heal other mine-damaged environments globally.

Hanging in the balance is a pending training and development contract between Laurentian and a cluster of universities, governments and mining companies in Peru.

Mykytczuk is one of three researchers who were let go while that contract was being drawn up. The area of interest involves a watershed study in the southern corner of the South American country that would involve not only mine waste cleanup but community engagement.

The parties from Peru all want to learn the 'Sudbury Formula,' said Gunn, "and they thought our experience in a community working together and partnerships could all be transferred down there."

Currently, faculty are waiting for the end of April when the first phase of the current CCAA process comes to an end. With the job and program cuts out of the way, a direction and plan's been set that will satisfy the creditors and lenders before the second phase of the actual university restructuring begins.

Mykytczuk is looking forward to a series of meetings next week with remaining faculty from the various mining, environment and earth sciences schools, and with Sudbury mining stakeholders in attendance, to examine options for her to continue her work as an industrial research chair.

Since Monday's mass firings, Mykytczuk said there's been a wonderful outpouring of support. There's also been some outreach by a few companies looking to recruit her, but Mykytczuk said she's not ready to leave Sudbury and Laurentian.

"Sudbury is an incredible place with an incredible history. and it has a lot to offer both to other northern communities and those coming from outside."

She arrived at Laurentian as a graduate student in 2005 and graduated with her PhD in 2010, returning two years later as a research scientist.

"I see this research as critically important, not just locally, but globally. There's no better place to do it. The circular economy and zero waste mining, and all the environmental goals set by the major mining companies who are looking for these types of solutions.

"It's going to be really hard to meet all those carbon and waste targets without having a larger tool box of things you can use."

Mykytczuk credits Sudbury for putting the pieces in place with Science North, the Northern Ontario School of Medicine, and the Health Sciences North Research Institute to creating a research corridor that helped stem the tide of the out-migration of talent and young people.

Up until last Monday, she considered Laurentian University a "remarkable" place that was well on its way to becoming a comprehensive institution with robust educational and research graduate and undergraduate programs.

But Mykytczuk said faculty will have their work cut out for them trying to sift through the ashes and rebuild what was lost in the sciences, arts and humanities, Francophone programs and Indigenous studies.

"What's likely to happen is we'll have another brain drain and that will be very damaging to Sudbury and the North."