Dedicated team brings innovative technologies to global market BESTECH, an engineering firm based in Sudbury , has spun off a new company, SHYFT Inc., to market and develop leading-edge products and solutions for the mining industry.
Aug 20, 2018 11:43 AM By: Sudbury Mining Solutions Journal 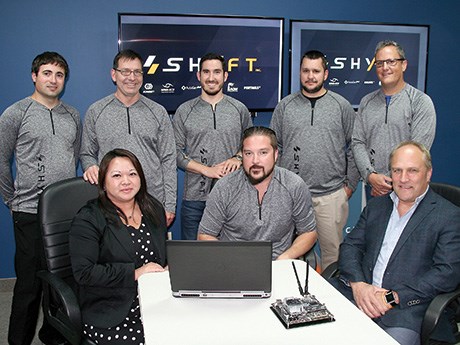 BESTECH, an engineering firm based in Sudbury, has spun off a new company, SHYFT Inc., to market and develop leading-edge products and solutions for the mining industry.

Over the years, explained BESTECH president and co-CEO Marc Boudreau, the company has developed a number of products and solutions for its clients, but didn’t market them as aggressively as it could given its primary focus on engineering services.

“So we decided it would be best for us to take the solutions we developed and pull them out of BESTECH,” said Boudreau. “The message is simple. BESTECH is an engineering company, and with SHYFT, we sell technology solutions.”

Among the solutions it has developed is its AQM Air Quality Monitoring system, touted as the largest air quality monitoring network in the world. Developed to monitor air quality in Sudbury for Vale and Glencore operations, AQM collects sulphur dioxide levels and other air quality data from 20 stations in and around the city. The data is transferred via cellular communications, fiber or high-speed cable depending on the location and reported to both mining companies and the Ontario Ministry of the Environment. Real time reporting to Vale and Glencore smelters allows the two mining companies to scale back smelting operations if sulphur dioxide levels exceed accepted levels.

Another product, NRG1-ECO, is an energy consumption optimization solution that modulates ventilation by leveraging equipment and personnel tracking systems and mine schedules. Deployed at Vale’s Totten Mine near Sudbury and Rio Tinto’s Diavik diamond mine in the Northwest Territories, NRG1-ECO delivers impressive savings: $2 million annually for Vale and $5 million for Diavik, claims Boudreau.

The solution can also be used to reduce energy consumption for compressed air, dewatering, or any other process where there is optimization potential,” said SHYFT president TrangTran-Valade. “We have reached a point where our products are mature, they’re proven and there’s a good track record that we can leverage to sell them globally.”

Also in the SHYFT portfolio is AutoGen Industrial Plug’n Play (IPnP), an automated process control solution that simplifies and speeds up the addition of new devices such as fans to a ventilation control system.

“In the old days, when you plugged in a mouse to a computer, you had to download the driver to make it work,” explained Boudreau. “It was the same with printers. Now, you just plug it in and it works. We’re doing this at a process control level, which is brand new for industry and positions us in a different place compared to our competitors.

“If you are going to integrate a ventilation control system, you’re going to have at least 100, 200 fans that you need to integrate. That takes a lot of effort. IPnP simplifies the entire process of bringing all those assets like fans or pumps into a system that can control them, so you don’t need to have automation experts come in and do all sorts of programming.

IPnP recognizes that a device has been connected to it and understands what kind of logic, what kind of control system to put in place automatically.”

IPnP is currently deployed at Vale’s Totten Mine.

“ADMMIT will be a game changer for the mining industry,” said Boudreau. “Many of the world’s large industrial mining companies are interested in what we’re building. We’re doing very preliminary engineering now and will be moving to detailed engineering in four or five months. It will take an investment of $12.5 million and two to three years to build.”

BESTECH came up with the idea in 2002, when fiber and WiFi underground were non-existent. “Now, fiber is standard, so the industry is ready to support it,” said Boudreau, who describes ADMMIT as the Amazon of mining – an automated process for delivering goods and material underground.”

Aside from its own products and solutions, “SHYFT is open to collaborating and partnering with other companies to market and support proven technologies,” said Tran-Valade.

“Everyone today is talking about disruptive technologies, but it’s not enough to be disruptive. You also need to get to optimal production. We know that adopting change comes with risk, but what we’re offering our clients is the opportunity to minimize that risk and optimize the benefits. That’s our unique offering.”

Established 23 years ago, BESTECH also has ambitious plans to broaden its scope of practice and expand to offer its services beyond Northern Ontario.

“We started as an electrical automation company, but we are now recognized for our expertise in mechanical, civil, structural and power engineering, so we now have the capacity to execute large projects,” said Tran-Valade.

The company is working on Vale’s Copper Cliff Mine project, has a Vale overflow engineering contract and is also working on Glencore’s Onaping Depth project. Last year, it completed a big engineering, procurement and construction management project for a sulphur dioxide plant in Timmins on behalf of Texas-based INEOS Calabrian in a mere 14 months.

The company once again has a workforce of 100 after downsizing somewhat during the recent downturn, has plans to set up a new division to do mine design and is looking at opening offices in Toronto and Vancouver.

READ: Another blockbuster issue of SMSJ