Lithium plant on the horizon

Feasibility study is underway An Australian company with a patented process for producing lithium carbonate for the rechargeable battery market has selected Sudbury for a 5,000-tonne per year processing facility.
0
Nov 8, 2018 4:23 PM By: Sudbury Mining Solutions Journal 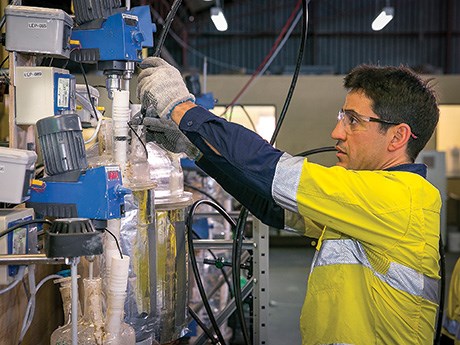 Mini plant run for the L-Max process in Australia produced a high-specification lithium carbonate product with a purity of 99.5 per cent.

An Australian company with a patented process for producing lithium carbonate for the rechargeable battery market has selected Sudbury for a 5,000-tonne per year processing facility.

There were several reasons for zeroing in on Sudbury, said Joe Walsh, managing director of Lepidico. Among them were the close proximity to a source of sulfuric acid and markets in the Great Lakes region for byproducts from the process.

“Our L-Max process is quite acid intensive,” explained Walsh. “We consume approximately one tonne of sulfuric acid for every tonne of lepidolite concentrate that we process, so proximity to an abundant source of affordable sulfuric acid is important.”

According to Walsh, Lepidico will require between 40,000 and 50,000 tonnes of acid, or approximately five per cent of the one million tonnes of sulfuric acid produced as a byproduct of Sudbury’s smelters.

Lepidico’s hydrometallurgical process “doesn’t just produce lithium carbonate,” said Walsh. “It also produces a range of byproducts, and to be economically viable, we need to be able to maximize the value of those byproducts.”

Among them are sulphide of potash fertilizer and amorphous silica, which has many applications. Assuming the company can find markets for all of the byproducts, the process for converting lepidolite concentrate into lithium carbonate will be competitive with other sources of lithium, as well as being waste-free.

A feasibility study is underway, the results should be known by February or March and the final report is expected to be available by April.

Bench-scale laboratory tests in Australia have demonstrated the viability of the L-Max process, and a scaled up pilot plant the company hopes to come onstream in April is planned to provide further confirmation.

“We’re looking to have this pilot plant and the data from our feasibility study available for prospective financiers and offtakers to evaluate,” said Walsh. “They will be able to see the process in operation. That’s going to be essential to get the best offtake and financing outcome for our shareholders.”

The objective, if all goes well, is to make a final investment decision on the Sudbury plant by the middle of 2019.

The capital required for the proposed 36,000-square-foot Sudbury plant will increase, but won’t double, said Walsh.

Down the road, annual production could be increased to 10,000 tonnes per year by expanding the plant or building a new one.

Lithium carbonate is currently produced from the lithium mineral spodumene and from brines in Chile and Argentina, but with increasing demand for lithium, Lepidico sees an opportunity to add lepidolite as a source of supply.

“If we go back five or six years, the demand growth for lithium chemical was in the low single digits per annum and the price was $5,000 to $6,000 per tonne,” said Walsh. “At that rate, existing producers could easily satisfy the incremental increase in annual demand. But with the advent of lithium-ion batteries and the emergence of electric vehicles, demand for lithium chemical has increased quite substantially. In 2017, it hit approximately 200,000 tonnes and projections are that it could be anywhere from 800,000 to one million tonnes per annum by 2025. That’s a four to five-fold increase over eight to 10 years.

Up until five years ago, lepidolite was largely of academic interest, noted Walsh. “There were a few small-scale operations around the world, including one in Portugal that served the ceramics industry, but with the increase in the lithium price, there’s now an incentive to bring on new lithium production capacity.

“Until now, there has never been a reason for developing lepidolite,” said Walsh, who has relocated to Toronto. “It has never been systematically explored for, so it’s very difficult to get a gauge of likely tonnages. The Alvarroes mine in Portugal has been operating since 1992 and we put the first drill holes in the property last year. They’ve been mining visually. They never bothered to drill it. We’re taking the first real systematic approach to evaluating the deposit.”

Lepidico signed a letter of intent with Avalon Advanced Materials for a closer supply of lepidolite from the Toronto-based junior’s Separation Rapids property 70 kilometres north of Kenora in northwestern Ontario. A recent preliminary economic assessment for the property, estimated annual production of 11,800 tonnes of lepidolite over a projected mine life of 18.5 years.

“Testwork on lepidolite samples from Separation Rapids has returned excellent recoveries and produced high-specification battery grade lithium carbonate using Lepidico’s L-Max technology,” said Walsh. “The partnership between Avalon and Lepidico provides an opportunity for lepidolite within the Separation Rapids deposit to provide a new source of lithium battery material to the market and also expedite the commercialization of L-Max.”

Ironically, Australia is currently the number one producer of lithium in the world, but all of it is spodumene concentrate shipped to China for conversion into lithium chemical. One strike against Australia for Lepidico’s proposed processing facility is the difficulty of securing a supply of sulfuric acid in the country.

“There is sulfuric acid in Australia,” said Walsh, “but virtually all of it is currently committed.”

Chile and Argentina are also important sources of lithium, but “the reality is that brine deposits in South America take a long time to ramp up and they’re quite capital intensive,” he noted.

“At the same time, spodumene deposits are getting progressively more remote and lower grade, so they’re likely to be higher cost.”

According to Walsh, commercialization of the L-Max process could serve as a catalyst for the discovery of more lepidolite and create an important new source of lithium.

Lepidolite has other beneficial characteristics because it doesn’t have a lot of the deleterious elements that can cause problems in battery-grade lithium carbonate.

“We consistently produce material above 99.5 per cent lithium carbonate. Elements such as magnesium, iron and chlorine are particularly problematic for a battery grade material, but lepidolite doesn’t contain any of them,” said Walsh.