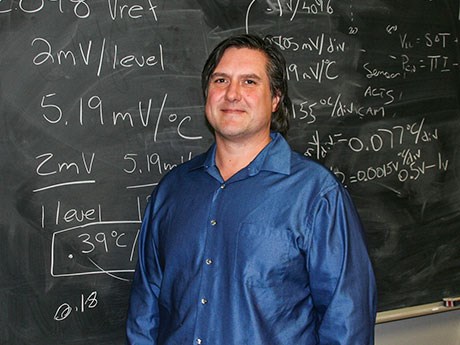 Steffon Luoma, senior research scientist, Jannatec Technologies, developed an algorithm to predict the onset of heat stress based on data from biometric sensors.

Jannatec Technologies is racing toward a radical reinvention of the personal protective equipment and communication devices that miners rely on to stay safe. Once known only for its Johnny Light cap lamps and two way radios, the Sudbury-based mining supplier now offers leading-edge proximity detection technology, wired hard hats that alert miners to nearby hazards and coveralls that monitor a miner’s vital signs and provide cooling to counter the effects of extreme heat at depth.

Proximity detection technology has been around for several years, but may now be poised to take off.

“In the next two or three years, proximity detection technology will be implemented in all underground mines,” predicts Jannatec vice-president Rey Boucher. “It’s already being legislated in the United States and is bound to trickle into Canada. There’s more of a focus on safety as vehicles are getting much larger underground, creating blind spots for operators.

“Our proximity detection system, JAWS, is infrastructureless. It’s not dependent on WiFi or leaky feeder. It’s peer-to-peer. As a manufacturer of cap lamps, we have an advantage. Other companies are trying to do vehicle to person proximity detection as well, but only the operator in the cab gets alerted. With the cap lamp, we’re able to offer bi-directional alerts, so if you have your back to a vehicle, a little light will illuminate on your cap lamp to tell you that there’s something coming towards you.”

Mines with cap lamps from competing companies can still take advantage of JAWS by acquiring Jannatec’s eHelmet, a wired hard hat with LEDs under the visor that illuminate when a vehicle or stationary hazard is nearby.

The eHelmet, a prototype of which was on display at MINExpo, will also be available with a built-in camera, which will be able to wirelessly transmit images and video via a mine’s communication infrastructure to surface and beyond.
If there’s an equipment breakdown, for example, a mechanic wearing a camera-equipped smart helmet will be able to transmit video to a manufacturer across the country or around the world for advice and step-by-step instructions, cutting downtime and maintenance costs.

Hard hats with built-in cameras, cap lamps with integrated VOIP phones and video monitors miners can wear on their wrists are all being worked on in Jannatec’s labs and will extend the connectedness we take for granted on surface to underground mines.

Smartview won’t allow the operation of the loader or truck before the circle check is completed and eliminates the need for paper-based reports. Proximity detection data and circle check results are transmitted via WiFi or leaky feeder to surface in real time, or uploaded at the end of a shift when the vehicle is parked. When the equipment is in reverse, the Smartview monitor displays video from the backup camera.

Another example of Jannatec’s capability as a solution provider is its successful development of an underground traffic management system.

“One of our clients came to us and told us that one of their biggest problems is traffic management on their ramp,” said Boucher. “It’s the most dangerous part of their mine because there’s so much traffic up and down and there are multiple levels. A guy is driving a large piece of equipment underground and as he’s going up the ramp, he has to take his hand off the steering wheel, grab his microphone and announce his location. He has to do that so many times that it becomes overwhelming. Our client asked us if we could automate this function, so we sat down to brainstorm and realized that we could solve the problem by leveraging our JAWS platform and the leaky feeder system in the mine. In the vehicle, we have a box with a radio tied to our JAWS system. We pre-record all of the callouts and, as the operator approaches a callout location, his position is automatically announced.

“There’s a lot we can do with our technology given that we’ve designed it ourselves. Every mine is different, so we have to have the ability to tailor our technology to address our clients’ needs.”

A member of the Centre for Excellence in Mining Innovation’s Underground Deep Mining Network, Jannatec is also working on the smart coverall solution for miners working in extreme heat.

A prototype undergoing testing in a heat chamber at Laurentian University, has both passive and active cooling mechanisms.

“Coveralls were never designed with heat in mind, so we’re redesigning them using non-traditional materials that are much better for heat transfer and breathability, ” said Steffon Luoma, a physicist overseeing Jannatec’s coverall project. The prototype allows for the release of sweat, acts as a barrier to external humidity and has several other design features to keep miners comfortable.

The suit is also equipped with biometric sensors that capture a person’s heart rate and blood pressure, as well as an active cooling system powered by the cap lamp battery pack.

“Currently, work/rest regimens in deep mines are determined by the environment, not the individual miner,” said Luoma. “Each person will react to heat differently depending on their physiology, so instead of using a blanket standard, our active cooling system uses feedback based on a person’s response to heat.”

An algorithm takes the sensor data, uses it to predict the miner’s core temperature and triggers the active system to supply cooling before the onset of heat stress.

Luoma won’t divulge any more about the technology except to say, “it has been around for a long time, and has been adapted and modified for use in an active cooling vest.”