North Bay company shares grand prize at Disrupt Mining Mining contractor Cementation expects to start construction of a full-scale prototype of an injection hoisting system before the end of the year.
May 18, 2017 1:45 PM By: Sudbury Mining Solutions Journal 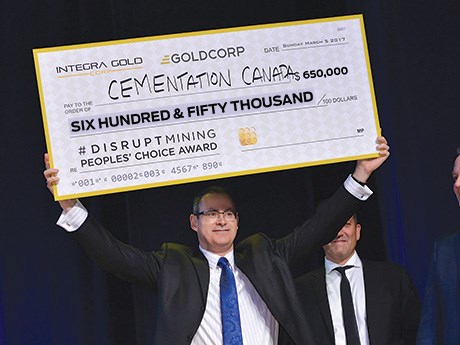 Mining contractor Cementation expects to start construction of a full-scale prototype of an injection hoisting system before the end of the year.

Co-winner of the Disrupt Mining Challenge sponsored by Goldcorp and Integra Gold March 5th, Cementation has had discussions with six mining companies interested in the innovative technology.

“Both Goldcorp and Integra Gold are very interested in supporting us,” said Cementation president Roy Slack. “A few groups want to work with us to develop the technology. A couple called and said, ‘We’d like you to install a system tomorrow,’ so there’s a lot of interest. Two companies we’re talking to are very serious. They’re looking for a location.”

“The system consists of a U-tube loop that goes down underground,” explained Cementation technical director Alun Price Jones. “A carrier fluid (with the consistency of mud) goes around this continuous loop, so you can think of it as a fluid conveyor belt.

“At the bottom, we have the run of mine material that needs to be sized down through crushing to approximately two inches maximum size. Once it’s sized, it’s introduced into a mixer. From there it goes into an injector pump and is delivered into the bottom part of the loop, where it blends with the carrier fluid and flows to surface.

“The bottom of the tube is at high pressure because the carrier fluid is at the full height of the depth of the mine,” explained Price Jones. “The novel element in our idea is that we take the material, prepare it in a slurry that has the consistency of wet concrete and use an injection pump with sufficient pressure to introduce it at the bottom of the loop to overcome the full height of the column of mud.”

Cementation built a concept-proving model of the injection hoisting system at its North Bay workshop to demonstrate the technology and gauge the quantity of material that could be transported.

“For an existing mine that’s trucking ore to surface, you can drill two boreholes, put the system in and you wouldn’t have to truck the ore to surface,” said Slack. “You can do away with the cost of the trucks and all the associated operating costs.”

For a mine that would normally look at hoisting ore to surface using a skip, use of injection hoisting is an even more attractive alternative.

“You wouldn’t need any bins,” said Slack. “You wouldn’t need a production hoist. The headframe would be much shorter because when we design a headframe, half the height is to accommodate bins and skips. Now, you just have a shaft with a cage in it. It’s much simpler and less expensive. In the shaft, you don’t need a loading pocket or a spill pocket. Depending on the ventilation requirements, we can also reduce the diameter of the shaft. We could go to rope guides instead of steel. There are a lot of things we can do to make the shaft less expensive, and when you take that out, you’re shortening the time at the front end of the project. We estimate six months off the traditional production shaft sinking schedule.”

Slack estimates a two-year payback in an existing mine, where the savings would be limited to operating costs.

“In a new mine, the savings would be in both capital and operating costs, so it’s really an attractive proposition, but we have to prove it up full-scale first and gain the confidence of the market. Typically, the studies we do now are trucking versus hoisting. In the future, it would be trucking versus hoisting versus injection hoisting. It doesn’t fit all mines. If you have a 40,000 tonne per day operation, we’re nowhere near that, but for mines with lower tonnages and mines in remote locations using generated power, the benefits are significant.”

Initially, Cementation is aiming for a system that can hoist 1,000 tonnes per day from a depth of up to 1,000 metres.

“The next step is to build a prototype to test the system and look at what tonnages we can actually do,” said Price Jones. “The pump we speced isn’t the largest pump on the market, so once we test the system, we may find that we can go deeper. The other thing we can do is install two systems: one to 1,000 metres and a second from there down to 2,000 metres. As far as the tonnage is concerned, we could have two parallel systems fed from one crusher. That gives us a 2,000 tonne per day capacity.”

A prototype is critical, said Price Jones, because no one is going to buy it based on a 200-foot model. We have to build one in a mine and show that it works.”

Building a prototype will allow Cementation to optimize the system by tweaking the characteristics of the carrier fluid, the speed of the pumps and how the flows are blended. It will also allow for the evaluation of maintenance and operating costs.

Slack estimates that a prototype would cost approximately $6 million to build.