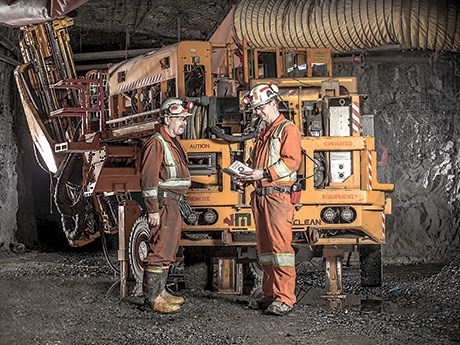 Goldcorp’s Musselwhite Mine in northwestern Ontario acquired MacLean bolter shown here in December on a rent-to-own basis and has since purchased it outright. Photo by Kevin Palmer.

The very first battery-powered unit, a scissor bolter, has been in production at Nickel Rim South for approximately one year. A second bolter, showcased at MINExpo 2016 in Las Vegas, went to Goldcorp’s Musselwhite Mine in northwestern Ontario in December on a rent-to-own basis and has since been purchased outright.

Five other units, including two scissor bolters, one scissor lift and two cassette units, are in production at Goldcorp’s Borden project near Chapleau in northeastern Ontario. Goldcorp has designated Borden an all-electric mine and, as of the end of September had completed 300 metres of an exploration ramp and was on schedule for a bulk sample extraction in October 2018. Commercial production is expected to begin in the second half of 2019.

Of the two cassette units, one is configured as a boom the truck, the other as an emulsion loader.

“The whole world is watching Borden, but there are a number of other projects in advance planning stages that are looking at battery electrification and going diesel free. A number of companies are facing the same issues as Goldcorp and Glencore, accessing deeper orebodies,” added Lister.

The savings add up “when you start stacking multiple EV units in a fleet,” noted Lister.

Annual ventilation savings alone total an estimated $620,400 based on a fleet of five utility vehicles – a scissor bolter, a scissor lift, two cassette trucks and a boom stuck. Annual fuel savings of $134,000 and maintenance savings of $100,000 bring the total savings to approximately $850,000.

There are also benefits less easily quantifiable, including improved air quality for miners and operator comfort attributable to less vibration and the quieter operation of battery-powered equipment.

There is a capital cost premium of 20 to 25 per cent for battery-powered equipment, but given the savings in diesel and ventilation, mining companies can expect a payback of the premium in one year, said product manager Anthony Griffiths.

MacLean Engineering EV equipment is powered by lithium ion-manganese-nickel-cobalt batteries and have onboard charging. Average tramming capability on a charge ranges between three and four hours, depending on grade.

On the drawing board are a battery-powered grader, a small section bolter, a shotcrete sprayer, and the electrification of all of the other narrower units.

“By next year, we will have completed the engineering on our full suite of equipment, so wherever you are in the world, there will be the right solution for you,” said Lister.