Reduced capex, faster delivery Maestro Digital Mine, the Sudbury-based company that developed the Vigilante Air Quality Monitoring System and the Plexus PowerNet that facilitates the deployment and maintenance of WiFi in underground mines, has launch
Mar 4, 2019 2:59 PM By: Sudbury Mining Solutions Journal 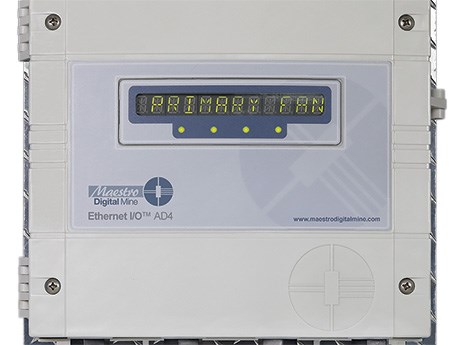 Maestro Digital Mine, the Sudbury-based company that developed the Vigilante Air Quality Monitoring System and the Plexus PowerNet that facilitates the deployment and maintenance of WiFi in underground mines, has launched a new product called Ethernet I/O to reduce the number of PLCs –programmable logic controllers – that are being installed underground.

PLCs, says Michael Gribbons, vice-president, Maestro Digital Mine, are a huge expense and take too long to put together.

“A mine has either an internal or external engineering group that develops the control panel and control components.

They provide a complete drawing package. Then it has to go to procurement. They have to buy the PLC, the electrical panel, all the control components, the power supply, etc. Then they have select a panel shop to assemble the components and, in parallel, they develop the software. Then they have to install the PLC, test and troubleshoot it. And they do that every time. It doesn’t make sense.”

Instead, said Gribbons, “we developed a piece of hardware and put embedded software in it to do all the heavy lifting.

It’s very complicated to do from an engineering standpoint. You have to think about every different application and put them all into the software, so the user can go to a Web page and configure it.

Gribbons cites the example of a PLC panel for a ventilation regulator, a louvre at the end of the level that connects the fresh air raise to the return air raise and regulates the volume of air that goes onto a level, claiming it could cost anywhere from $50,000 to $150,000.

Maestro Digital Mine developed Ethernet I/O as part of its Vigilante air monitoring system, but didn’t at the time see it as a separate product that it could apply to other applications.

“It was a subset of the Vigilante. It plugs into the Vigilante as a slave. Now, we have it as a standalone item because we saw the power of it.”

Door controls are a natural application, said Gribbons. “They’re a nightmare. Each door has a PLC that controls it. If it gets messed up, you have to go underground to get it going again. That’s crazy. Door controls and sump controls will be our priorities.”

“We’re in the process now of making this embedded software,” said Gribbons. “It will take another six months.”

Maestro Digital Mine already has orders just based on its reputation and discussions with select customers.

“Among our customers are some of the largest companies that we thought would be hardest to convince – companies like Rio Tinto, BHP Billiton and Vale.”

The advantages of Ethernet I/O are savings of between 50 and 75 per cent, reduced delivery times – two to four weeks instead of six to eight months for standardized products – and less auxiliary equipment to maintain.

“It’s radically different, but it’s being accepted because of our reputation in the marketplace. Our customers know that if we say we’re going to do it, we may have some troubles at the beginning, but we always come back and get it right.”