By Leon Wasser Generating the power required to run a mine in Northern Canada is both a technical challenge, as well as a major operating cost.
Aug 18, 2017 3:49 PM By: Sudbury Mining Solutions Journal 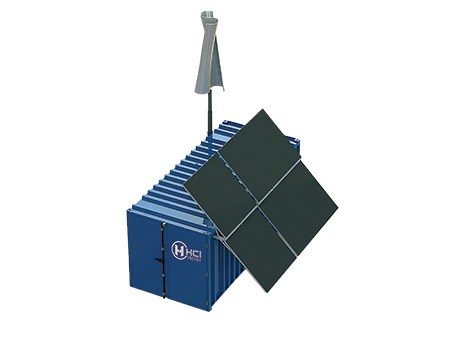 The hydrogen fuel is initiated by an external power trigger, which in HCI Cube’s case is provided by an on-site small solar photovoltaic (PV) panel, a micro-wind turbine, or electrolyzer.

Generating the power required to run a mine in Northern Canada is both a technical challenge, as well as a major operating cost. However, recent advances in hydrogen fuel power technology have led to the development of cost effective systems scaled to the needs of major industrial mining operations.

Traditionally, most off-grid mining companies in Canada’s north have relied on diesel generators to supply power and heat. Diesel generators are noisy and highly polluting, and diesel fuel needs to be continuously supplied, often by air at a great cost and some risk.

At the June 2017 Hydrogen for Sustainable Northern Communities Forum in North Bay, industry leaders described hydrogen as the ideal power generator for Canada’s north, and the logical replacement for diesel generators.

Hydrogen fuel power generation is a superior option compared with diesel because it relies on a self-perpetuating generating process, which uses fresh water or salt water to drive the turbine.

Given that hydrogen fueled power uses hydrogen separated from water as its primary fuel, a product that is amply available across most of Canada, including Northern Ontario, it is an ideal source of energy for Canada’s north.

The basic chemistry has been understood for over a century. There have been numerous challenges to the development of this energy technology, including both the need to reduce system costs, and to increase system capacity to fulfill the power requirements most suited to this energy source. Today, this technology is being used globally across many sectors.

It is no secret that Canada has been a leader in the development of hydrogen technologies. British Columbia-based Ballard Technology has been a leader in this field since it was founded in 1979 and younger companies like Ontario-based Hydrogenics develop and sell the fuel cell core technologies. Turbines have also been used in multiple industries around the world since the early 1900s.

More important to mining companies, these Canadian fuel components are incorporated into powerful stationary power systems by HCI Energy, which builds modular 2 kW to 3.0 MW power systems for the most demanding environments.

All hydrogen systems fundamentally rely on one mechanism to generate power – the breaking of the powerful H2O bond in water, which releases a large quantity of energy. This breaking of the bond can be achieved in a number of ways, but most efficiently through an electrolysis process. Not all electrolyzers are the same, and HCI Energy’s process is among the most efficient currently on the market.

The hydrogen fuel is initiated by an external power trigger, which in HCI Cube’s case is provided by an on-site small solar photovoltaic (PV) panel, a micro-wind turbine, or electrolyzer.

One of the challenges for this energy process is managing the hydrogen, which is highly combustible. The key goal is to keep the gas isolated and protected in some form of protective armour. HCI Energy achieves this by storing the entire power generating system in a standard shipping container which has the added advantage of enabling the entire system to be transported virtually fully assembled by transport truck, freight train, ship or helicopter to its destination. Despite safety concerns, H2 has been stored for decades without issues using single or double walled exterior tanks and cylinders. The internal container tank is for day-use storage, which is accessible for maintenance and inspections.

Although the most common applications of hydrogen are in the transportation sector, it is also becoming a fuel of choice in the north. HCI Energy is active in Alaska and northern Alberta, and has entered the mining sector in Quebec’s remote northern Nunavik region. The combination of fuel reliability, system robustness and non-toxic emissions make hydrogen a fuel to consider for both existing and new off-grid mine developments.

In addition to northern mines, Canadian governments and northern Indigenous communities are increasingly focusing on hydrogen as an alternative to diesel fuel which is even more challenging to supply due to the impact on rising northern winter temperatures and the threat to winter ice roads. The fact that northern diesel generators give off highly polluting greenhouse gas emissions directly into the sensitive northern atmosphere amplifies the rationale for hydrogen fuel cell-based power generation in Canada’s northern and Arctic regions.

The hydrogen generation process produces potable and distilled water and medical grade oxygen as by-products. All of these products are of great value to mining companies.

Additionally, fuel cells can be designed to generate sufficient power or excess hydrogen to fuel electric or hydrogen powered mine vehicles, which currently also run on diesel fuel.