CIM Sudbury hosts panel discussion on BEVs Mining executives in Northeastern Ontario have agreed that battery electric vehicles (BEV) are indeed the way of the future, but there are still a few bumps in the road to be overcome before BEVs are complet
Mar 4, 2019 3:01 PM By: Len Gilllis 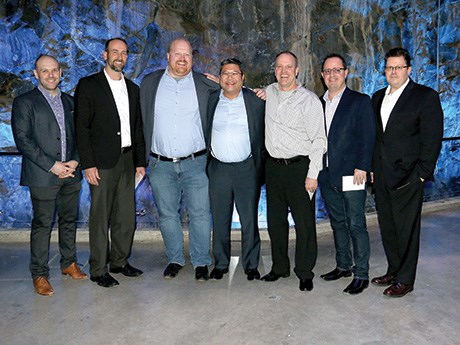 Mining executives in Northeastern Ontario have agreed that battery electric vehicles (BEV) are indeed the way of the future, but there are still a few bumps in the road to be overcome before BEVs are completely accepted and overtake diesel.

Already, most mining operations in Sudbury and across the North are experimenting with battery-operated mobile mining equipment, and the results look promising.

That was evident when the Sudbury branch of the CIM (Canadian Institute of Mining, Metallurgy and Petroleum) held a panel discussion to examine the use and acceptance of battery-operated equipment. The event was held January 17 at Science North in Sudbury.

“There was a high level of engagement and interest. We had people travel from as far away as California to participate today,” said McFadden.

He added that he was pleased to see the level of acceptance and willingness from the mining company representatives who joined the discussion, in part because it will pay off for workers and also for mining companies, which are evolving away from diesel mining equipment.

“I think battery electric vehicles are the most significant improvement in the long term health of the underground employee and the fact that they’re now becoming cost effective for mining companies to deploy is fantastic,” said McFadden.

The mining executives also offered their own positive commentary on BEVs, often tempered with concerns regarding the durability of battery-powered machines and the length of charging times. Those comments were just as quickly offset as they remarked on the low-impact environmental factors such as no exhaust emissions, significantly less noise and a lot less heat.

Vale’s Tiangco called for caution, saying BEVs need more study. He also commented that, in time, he foresees battery-operated equipment becoming less mechanically complex, which would cut down on maintenance and save money.

Goldcorp engineer Van Koppen told the audience that when he began working underground he was one of the biggest sceptics on the usefulness of battery vehicles. But that changed completely after he was assigned to oversee the engineering and pre-feasibility for the Borden project, destined to become Canada’s first all-electric mine.

He described the sound from the mine as being so quiet “it was freaky.”

Glencore’s Wisniewski was asked to comment on air quality.

“Really, the number one thing for us going deep in Sudbury is heat, so it’s all about getting the right temperature in the mine and minimizing the (ventilation),” he replied.

“We’re finding that a lot less heat comes off these machines than we first thought,” said Wisniewski.

The heat generated by a battery-powered vehicle is eight times less than from an identical diesel vehicle and the cash savings for operating costs are significant, he said.

That was a key point appreciated by Mayhew of Kirkland Lake Gold, which is running several battery-powered haulage trucks and LHDs.

“Our strategy is very simple. We have no choice,” Mayhew told the audience. “We’re going to continue at Macassa with battery technology. We are committed.”

He added that before committing to battery electric mining vehicles there needed to be a full buy-in from everyone, from the top down and from the bottom up.

“This is the way to go. It’s the thing of the future. It is where we are heading and where Macassa is going.”

Battery technology is changing and maintenance technicians have to be kept up to date,” said Mayhew.

“You have to manage your battery team, so they’re up to the latest standards and can fix the equipment because it is a major impact to operations if the equipment is not running.”

He said the mine in Kirkland Lake has a dedicated team just to look after battery problems.

“They’re underground every day. They live it. They breathe it. When a piece of equipment goes down, we make sure that they’re dispatched. They go fix it and get it back into operation as soon as possible.

“What I can tell you is that they are more advanced than our suppliers. In our world, we don’t have time to call a supplier at 2 a.m. to fix a machine or to troubleshoot. Our technicians understand the technology.”

The importance of having the right maintenance people was echoed by Huff, representing Artisan Vehicles, the California based company that specializes in BEVs.

He said his company is helping to keep the Macassa battery maintenance team fully trained on any changes in the technology.
“We do provide technicians. We are hiring people and training them and supporting them locally,” Huff revealed.

“One way we handle this lack of training in the short term is through the Internet. We provide the information and technical support directly to the (Macassa) technicians working on the equipment.

“They give us data. We give them back diagnoses and tell them what to do and provide procedures on the fly as they need them,” he said.

Sudbury Mining Solutions Journal also asked Huff about an announcement made by his company in 2017 to establish an assembly plant in Northern Ontario.

“It’s still on the table,” replied Huff. “ We’re kind of taking things as it goes, you know. We’re still trying to build up our facility in California to meet the volume needs we have.

“We’re looking – and I don’t want to make too many public statements about that, but we are still for sure considering that because it is important to build near the market.”

“That would be in Kirkland Lake, right?” Huff was asked.

“Kirkland Lake is where our biggest install-base is. And so we have a facility there and it does service and some warehousing and refurbishment and stuff like that, so there is still a presence there,” he said.

Huff said the Kirkland Lake location would be ideal for serving mining camps across Northern Canada.

“It’s the whole Canadian Shield. It’s a relatively central location which is why we’re putting down roots there. And that’s going to stay.”

Huff said the promised Kirkland Lake location was envisioned as a centre of excellence that would focus on training and possibly some final assembly.