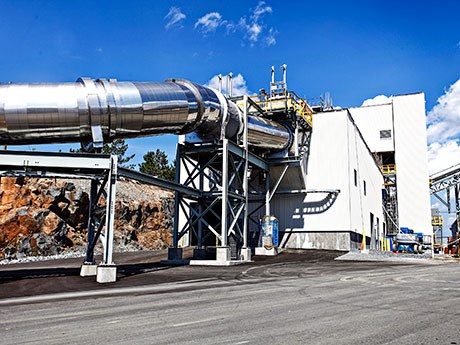 Vale has announced the completion of a $75 million Nickel Refinery Emissions Reduction Project in Sudbury.

The largest investment and facility upgrade at the Copper Cliff nickel refinery since it was constructed in 1973 brings the company into compliance with new provincial and federal government standards for the emission of nickel and total suspended particulates.

Most of the emissions come out of the stack and the rooftop, but there are also fugitive emissions from trucks and other traffic exiting the site.

“We’re in the process of completing the installation of 25 baghouses to capture emissions from the refinery. One of them we call a super baghouse. It’s one of the biggest in North America. Essentially, the technology is just what you might think if you had to guess what a baghouse is. It’s a big filter that captures the nickel and particulates and cleans the gas before it’s emitted to the environment.”

Vale has also installed a drive-through wash bay to clean trucks before they leave the site.

“The other thing we did is really old technology. It’s called paving,” said Kuzenko. “We paved the gravel surfaces and have a extensive road washing program to make sure the pavement is kept clean.”

The monitoring of nickel and total suspended particulates from the refinery is performed through a complicated modeling exercise that factors in wind direction, production volumes, metals in production and emission volumes.

“All of these modeled parameters get put into giant and complicated software that spits out numbers, so this isn’t like the SO2 world where we have monitors all over the community to measure actual ground level concentrations,” said Kuzenko. “This is very much theoretical and a modeled exercise about what companies are permitted to put into the environment. The numbers are just so small.”

The project consumed two million pounds of steel, 50 kilometres of electrical cable and 3,200 cubic metres of concrete. It encompassed 300 goods and services contracts and at the peak of construction employed between 100 and 125 tradespeople.