New Gold pioneers Barcode of Life technology As a university student, Dennis Wilson remembers counting the hairs on the back of a fly’s leg during species identification fieldwork for environmental assessments and remediation.
Feb 27, 2017 11:01 AM By: Sudbury Mining Solutions Journal 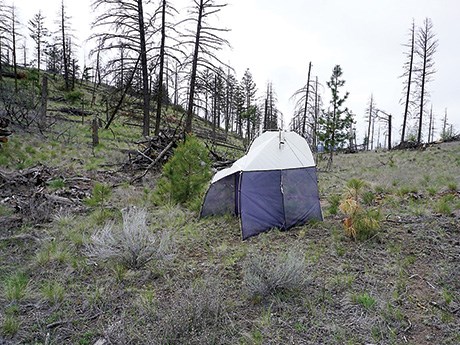 A Malaise trap at New Gold’s New Afton Mine near Kamloops, British Columbia. Insects fly upwards towards the light into a small bottle containing ethanol, which preserves them for DNA analysis.

As a university student, Dennis Wilson remembers counting the hairs on the back of a fly’s leg during species identification fieldwork for environmental assessments and remediation.

“It was very labour intensive, we were all pretty bad at it and it was very costly,” said Wilson, director of health, safety, environment and social responsibility for New Gold.

Four years ago, at a meeting of the Mining Association of Canada’s Towards Sustainable Mining Group, Wilson learned about a new method of species identification available from the Biodiversity Institute of Ontario at Guelph University.

Insects are collected in traps, sent to the lab and identified using advanced Barcode of Life genomics technology.

“We listened to the presentation and we all agreed how brilliantly innovative it was, Wilson told a room full of mining suppliers at a CAMESE forum on innovation in November. “The guy from the University of Guelph went away and expected all these phone calls based on the positive response he had at the meeting. I waited about a month to call him and discovered he hadn’t heard from anyone.”

Wilson, who was the environmental manager at New Gold’s New Afton Mine near Kamloops, British Columbia, decided to take advantage of the opportunity to work with the Biodiversity Institute of Ontario’s Canadian Centre for DNA Barcoding in 2013, but the rest of the mining industry, to the best of his knowledge, is still sending students out in the field to count the hairs on the legs of flies.

There needs to be a better way of advancing an idea or innovative solution to a point where it’s accepted and implemented in the mining industry, he urged.

“I’m not sure everyone understands what their role is in the process, nor does the government understand its role in supporting these initiatives so there’s less risk on the part of the proponents of the process.”

New Gold used tent-like structures called Malaise traps to collect arthopods at four sites around New Afton. The insects fly upwards towards the light into a small bottle containing ethanol, which preserves them for DNA analysis. The bottles were collected weekly, stored at -20 degrees Celsius and shipped to the Biodiversity Institute of Ontario for analysis.

DNA barcode analysis of 51,261 specimens was completed in August 2014, revealing a total of 4,015 distinct species.

“At the time we started the project, we only worked with insect species, but I think they’ve come a long way since then,” said Wilson. “They can now do things like fungi and different animals and plants, so we’re getting to the point where we can use the technology to identify anything that has DNA.

“Now, we can use pitfall traps, so instead of just doing flying insects, we’re doing things that crawl along the ground, and in the future we will be able to do other animal species as well.

“You don’t have to go out in the field with a floodlight at night looking for different species. You can put bait out and use sticky tape to get a hair sample. There are definitely opportunities to extend what we’ve done to make sure mining companies don’t have to spend anywhere near as much time or money (on species identification).”

Armed with the results of DNA analysis from analog and disturbed sites, mine environmental staff can, for example, add swales which will fill with water, or logs to create a more inviting habitat.

“If it assists you at the end of the day to relinquish your site to the satisfaction of the regulator and the community, I think it’s well worth it,” said Wilson. “We do a lot of work with First Nation groups and I’d like to think they respect the fact that we’ve gone to this extent to try to make sure that we’re doing the right thing.”

Barcode of Life technology hasn’t been used to date at New Gold’s Rainy River Mine in northwestern Ontario, which is expected to be in production later this year, but “there’s a high potential they’ll be on board with it because it just makes sense,” said Wilson.