The Olympic Dam (OD) mine is located in central South Australia, approximately 560 km north-northwest of Adelaide. Production from the large polymetallic orebody commenced in 1988 when the site was owned by Western Mining Corporation. BHP Group Ltd acquired OD in 2005 and the site has since become one of the largest sublevel open stope mines in the world.

The OD geotech team subsequently recognized that they too could use the LiDAR data to improve their understanding of the rock mass characteristics, research failure mechanisms within stopes, and revaluate design assumptions through back-analysis.

Over time, the frequency with which Hovermap is used at the site has increased. The system is now deployed nearly every day and the range of targets has expanded. Hovermap is currently used to scan stopes, drives, orepasses, raises and retired infrastructure. 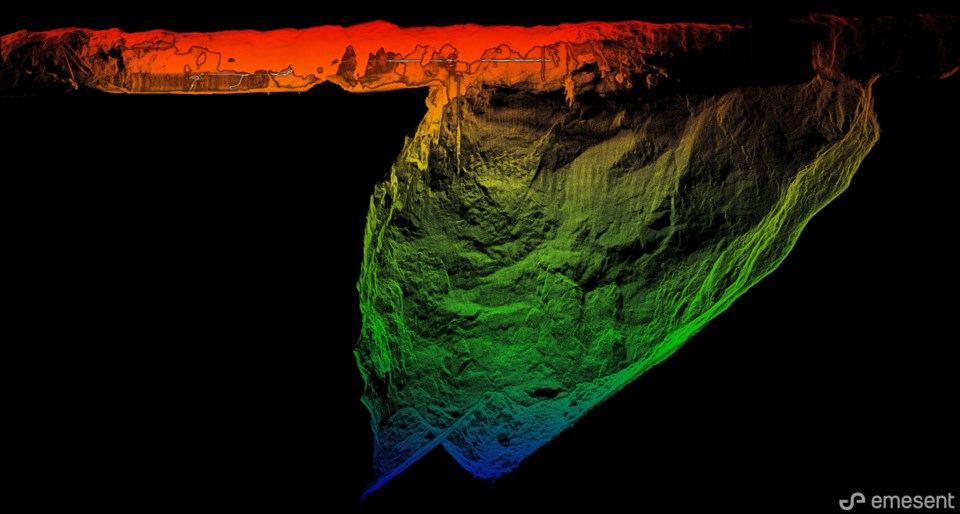 OD has integrated mobile LiDAR scanning into its underground 8-day operational scheduling workflow. Engineers, surveyors and geologists identify the target and purpose of each scan and submit a scheduling request. This process ensures sites are prepared and hardware and operators are available.

Multiple drone-based scans may be scheduled each day. Scan priorities vary and urgent scans may take precedence over scheduled production. Scans are performed by underground operators who have been trained to pilot the Hovermap system. Set-up and scanning take just 10 minutes.

Raw scan data is processed underground by the drone operators. This reduces processing time on the surface and enables the Hovermap scanner to remain underground. Each scan generates between 500 mb – 1 Gb of data. Two files, in .laz/.las format, are uploaded onto OD’s network for use on the surface: a full raw point cloud and a sub-sampled low-resolution point cloud.

More than 250 stope scans have been completed since the Hovermap technology was introduced. As underground operators have become more proficient in flying the drone, and surface teams more accustomed to working with point cloud data, the number of scans conducted each week has increased.

Scanning is now scheduled after almost every blast packet and at regular intervals throughout the lifecycle of each stope. This enables potential issues to be identified early and allows accurate measurement of in-stope stock volumes. Because each scan is georeferenced, merging scans can produce a progression of stope shapes and material extraction.

Data capture methods vary according to the stope conditions. If there is stock in a stope and access from the drawpoint is not possible, crown or mid-level drone-based scans are performed. Final stope scans are captured using Hovermap mounted to a teleremote loader, which is driven in and backed out. This method is quick and less risky than flying.

Read the full reports on how the Olympic Dam team maximize value from their Hovermap investment.

Northern mine supply companies encouraged to bet on Nevada
0