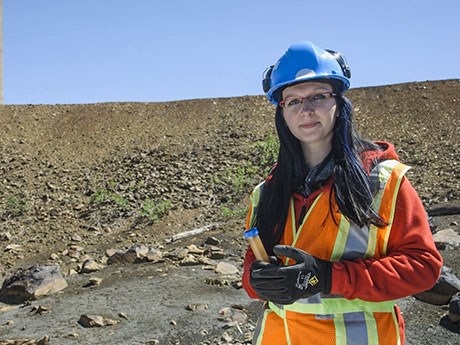 Nadia Mykytczuk, recently appointed NOHFC industrial research chair for biomining, bioremediation and science communications, hopes to advance the use of microbes in the mining industry.

Taking biomining and bioremediation to the next level

Biomining and bioremediation are one step closer to wider use in the mining industry with the creation of a new position at Laurentian University geared towards commercializing the technologies.

“It’s less of a teaching load and more research,” said Mykytczuk. “The impetus was to create a vibrant research program and initiate new projects with industry. The research chair matters because we have a very long legacy of mine waste impacts in Canada and the world, and we now have the opportunity to use biotechnology to help decrease those impacts.”

Mykytczuk has been working as a Laurentian researcher in the field since 2012, but the application of biotechnologies to mining is not a new idea.

“These technologies were put in practice 30 years ago, but they’ve struggled with efficacy. Now, molecular technology has advanced to a point where high resolution imaging has improved the understanding of microbial communities,” said Mykytczuk.

Biotechnologies refer to the manipulation of microbial communities for industrial purposes. In the case of mining, the residual minerals in mine waste can act as food for microbial communities. Biomining refers to the extraction of valuable elements from mine waste for economic gain; bioremediation is more about reducing the environmental impact of mining activity.

The scientists working with these technologies 30 years ago were putting this concept to work, but the tools to look at the microbes were not advanced enough to identify specific types or groups. Once that identification was possible, scientists were better able to match specific microbes to specific waste types to optimize outcomes.

“We used to look at this entire system as a black box, but we weren’t able to understand how it works,” said Mykytczuk. “It was just input and outputs. Now, because of molecular tools we’ve opened this black box and have the information that allows us to tailor, optimize and improve these technologies.”

The Long Lake Gold mine that operated between 1908 and 1937 in the Sudbury area and produced around 200,000 tonnes of tailings that are high in arsenic is a case in point. While an earlier application of a “black box” of microbes to these tailings was somewhat effective, new technologies would allow scientists to pull the ideal microbes out of that box to specifically target the arsenic.

One way to apply microbes is in the field, but the process can takes months or even years. A faster way is to introduce the microbes with the waste into a “digester” or mechanical stirring pot that has controlled conditions. The material is processed faster and the turnover is a matter of days instead of months.

“It’s easier to optimize the bioreactor,” said Mykytczuk. “The recipe has to be just right.”

Finding these recipes and ways to get them to market is now Mykytczuk’s main focus. The recipe is especially tricky in northern Canada, and northern regions globally, she admitted.

Mykytczuk said biomining has been successfully applied in Finland at a nickel mine, and she is looking to them as a global proof of concept. In Ontario, Mykytczuk is hoping to take on site specific projects in the coming months to develop a more local proof of concept.

Mykytczuk estimates the process to get the microbes to market will take five to 10 years, and she hopes that the research will result in a commercialization, research and development incubator.

“A lot of what academics do has been left on the lab bench,” said Mykytczuk. “Our goal is to accelerate towards commercialization.”