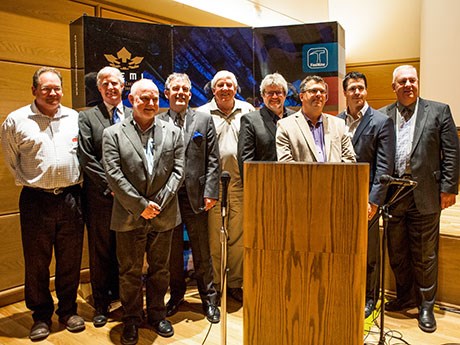 Deep mines have the potential to be a lot safer and more energy efficient as a result of learnings from the now completed Smart Underground Monitoring and Integrated Technologies (SUMIT) R&D program.

Managed by the Centre of Excellence in Mining Innovation (CEMI) in Sudbury and led by Laurentian University in partnership with Queen’s University and the University of Toronto, SUMIT has produced a wealth of new knowledge on managing rock mass behaviour and reducing energy costs in deep mines.

“The research program began to take shape in 2009 when industry approached us with a problem they had with fault slip caused rockbursts – major, unpredictable rockbursts that are potentially very serious in terms of its consequences both to equipment and people,” said Damien Duff, CEMI’s vice-president for geoscience and geotechnical R&D.

From May 2009 to late 2010, CEMI organized a series of six workshops to pick the brains of some of the world’s most prominent experts in rock mechanics.

“Each workshop was focused on a different technical challenge that we felt had a role to play in solving the problem,” said Duff. “The workshops helped define more clearly in our minds what needed to be done and helped us identify who we needed to work with.”

Funding of $6.6 million came from industry, government and academia with Vale, Glencore, Rio Tinto, the Ontario government and the three universities all pitching in.

SUMIT included 20 projects in six major technical areas and involved a total of 98 highly skilled technical people at universities across Canada. It provided training for 75 highly qualified persons, including post-docs, PhDs, Masters students and undergraduates, and produced a harvest of 81 peer reviewed articles, 83 conference presentations, 41 conference papers, one spin-off company and several new patents, “as well as new guidelines, approaches and software tools for mine designers and operators to deal with rock mass behaviour,” said Duff.

Researchers at Laurentian University produced guidelines and operating practices for the selection of underground support systems in dynamic ground conditions, as well as a Burst Support Tool that will help rock engineers determine the best combination of ground support for specific geotechnical conditions.

One PhD student developed a better understanding of seismic wave forms, or ray paths, how they travel through a rock mass and how they’re affected by major structures or openings. Another student working under the direction of Prof. Peter Kaiser developed a better understanding of how structures and rock masses that are buried deeply and subject to overhead load contribute to the the likelihood of ground failure.

At the University of Toronto, researchers succeeded in demonstrating the use of geophysics to monitor rock mass behaviour and developed a new sensor – a fiber optic-based strain measurement device to measure deformation.

“The way we used to measure deformation was by either observing it or by putting extensometers in the ground,” said Duff. “In a rock mass of 30 metres by 15 metres by 15 metres, we might be able to put a few extensometers in the ground. The number of measurements you can take is very limited, but using the less expensive fiber optic-based sensor, we get an order of magnitude more measurements.”

Work at Laurentian University on energy efficiency resulted in software tools to audit energy use and reduce waste. Research was also conducted on optimizing the effectiveness of ice stopes and natural heat exchange areas for mine cooling and on the use of hydraulic air compressors.

A summary of all of the research will be published online by the Canadian Institute of Mining and Metallurgy later this year.

Commercializing the knowledge gained from SUMIT is the only way it’s going to be adopted, said Duff.

“The new sensors, best practices and software tools will only benefit industry if something commercializable comes out of it. Most of the knowledge now resides in papers and theses, so it will be up to small and medium enterprises to recognize the opportunity.”