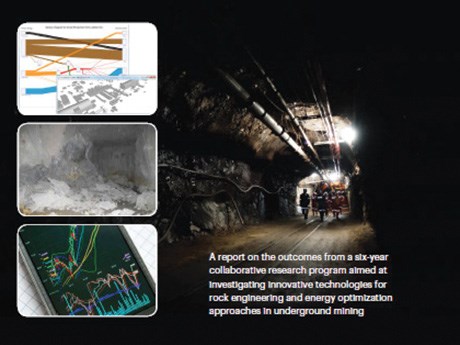 Program journal can be freely downloaded from CEMI and CIM websites.

A 112-page program journal reporting on the results of the Smart Underground Monitoring & Integrated Technologies (SUMIT) research program is available for downloading on the Centre for Excellence in Mining Innovation (CEMI) website.

“The research program began to take shape in 2009 when industry approached us with a problem they had with fault slip caused rockbursts,” said Damien Duff, CEMI’s former vice-president for geoscience and geotechnical R&D who oversaw the program. “The incidence of fault slip caused rockbursting in our mines is growing – largely because mines are getting deeper,” he told Sudbury Mining Solutions Journal at the conclusion of the program last year. “As they get deeper, mining induced seismicity increases and risks associated with that – including fault slip rockbursting – are likewise increasing.”

Researchers at Laurentian University produced guidelines and operating practices for the selection of underground support systems in dynamic ground conditions, as well as a Burst Support Tool that will help rock engineers determine the best combination of ground support for specific geotechnical conditions.

One PhD student developed a better understanding of seismic wave forms, or ray paths, how they travel through a rock mass and how they’re affected by major structures or openings. Another student working under the direction of principal investigator Peter Kaiser developed a better understanding of how structures and rock masses that are buried deeply and subject to overhead load contribute to the likelihood of ground failure.

At the University of Toronto, researchers succeeded in demonstrating the use of geophysics to monitor rock mass behaviour and developed a new sensor – a fiber optic-based strain measurement device to measure deformation.

Work at Laurentian University on energy efficiency resulted in software tools to audit energy use and reduce waste.

Research was also conducted on optimizing the effectiveness of ice stopes and natural heat exchange areas for mine cooling and on the use of hydraulic air compressors.

CEMI partnered with the Canadian Institute of Mining, Metallurgy and Petroleum (CIM) to publish the SUMIT Program Journal.

The 112-page report is free and can be downloaded at www.cim.org or www.cemi.ca/s-u-m-t-program-journal/