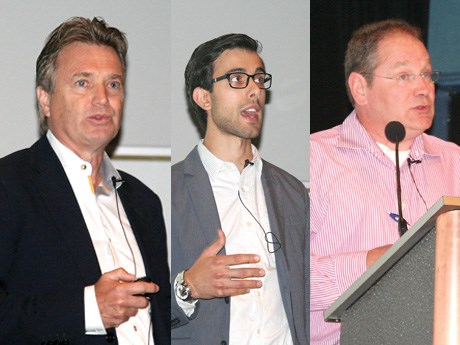 Over the last decade, according to Douglas Morrison, president and CEO of the Centre for Excellence in Mining Innovation (CEMI), productivity in the mining industry has decreased 10 to 12 per cent, and operating costs increased 10 to 15 per cent. During the same period, capital expense overruns have averaged 20 to 40 per cent and projects worth $25 to $30 billion were delayed because of social and environmental concerns.

It’s not a pretty picture, but one that CEMI hopes to rectify through research and innovation.

“We’re not interested in improving our performance by 10, 20 or even 50 per cent,” said Morrison at the CEMI annual general meeting September 27th. “Our target is double or triple the current performance, or half or a third of the current cost of doing something. We aim for these targets not because we think we can always hit them, but because that’s the scale of target we have to achieve to have an impact on the net present value of a mining project.

CEMI hopes to double advance rates and production rates, and halve maintenance, operating costs and energy consumption for ventilation and cooling by half. It also wants to halve the time it takes for permitting to five instead of 10 years.

Another area of focus is waste management.

“In Canada, we’re very good at managing our waste…but the sad fact is that there’s a tailings dam failure somewhere in the world at least once a year that undermines the credibility of the industry,” said Morrison. “It’s not simply a question of dry stacking tailings. We have to go through a process of separation and sequestration of the benign and non-benign products in our tailings.”

In fiscal 2017, CEMI reported spending $9.9 million on innovation, including $4.5 million on mine productivity projects, $3.1 million on R&D related to mining at depth and $2.1 million on commercialization services and business case analysis.

It’s Ultra Deep Mining Network (UDMN), a five-year $35 million Business-led Network of Centres of Excellence program tackling the challenges of resource extraction at depths below 2.5 kilometres has 21 active projects, half of which will be wrapped up by calendar year end.

Incorrect calibration could result in miners being evacuated unnecessarily or left in unsafe conditions. Traditionally, calibration had to be done by skilled technicians in a challenging environment. With the Vigilante AQS, calibration can be done from surface over the mine’s network infrastructure.

“The mining industry is a very minor consumer of gas sensors, so none of the manufacturers’ commercial decisions are based on the needs of our industry, whereas mining is 95 per cent of our business,” said Gribbons.

Steffon Luoma and Kevin Reynen of Jannatec Technologies offered an overview of two projects – one focusing on thermal management at depth, the other on wearable electronics, including physiological monitoring devices that measure heart rate and skin temperature, communication modules that allow for the transmission of text messages, videos and photographs, and collision avoidance technology integrated with a miner’s helmet.

Dean Millar, president of Electrale Innovation, highlighted the company’s hydraulic air compressor, which produces compressed air at a fraction of the cost of traditional compressors while also cooling the air underground.

A recently completed demonstrator located at Dynamic Earth in Sudbury was built to prove the efficacy of the technology and can be used to design commercial-scale systems, which would be six-times larger, said Millar.