Trade delegations digging for mining expertise and experiences in Sudbury 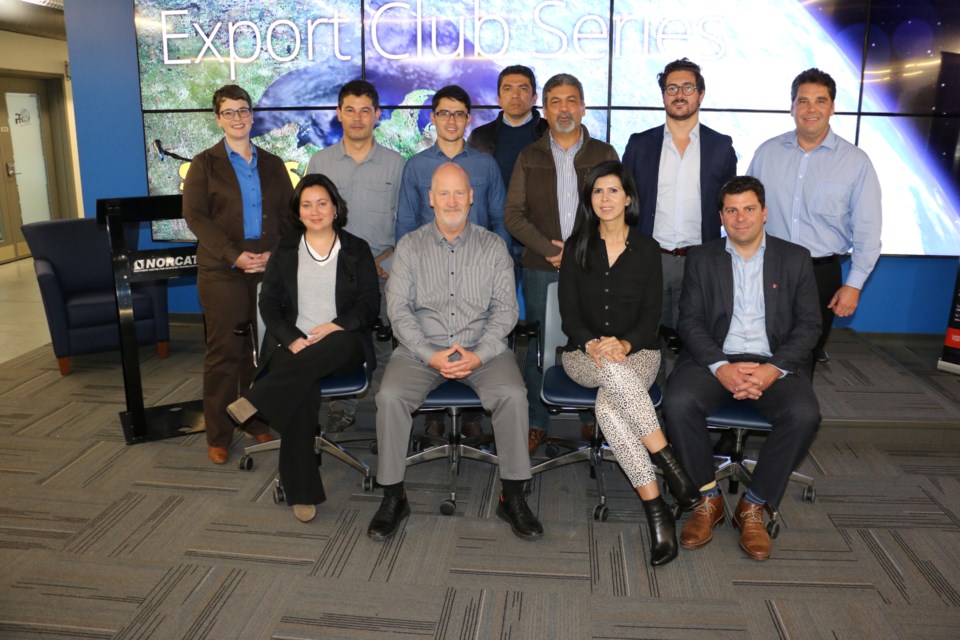 The City of Greater Sudbury has rolled out the red carpet no less than 10 times in the past year for trade delegations from countries around the world coming to see the mining industry as well as the mining service and supply sector.

The payoff has been low key but significant according to organizers who have worked to entice the trade delegations with partnerships formed between different levels of government, mining companies, the mining service organizations and educators.

“The key word is partnerships because these are happening from many different partners from all levels of government,” said Scott Rennie, a Business Development Officer with the city. Rennie, who is also the project manager for Northern Ontario exports, was part of the host committee that welcomed a mining delegation from Colombia in early October.

Rennie said the Colombian mining group came to Sudbury thanks to the city’s relationship with the trade commission services with Global Affairs Canada. The group included representatives from Gran Colombia Gold, Anglo Gold, Minesa and the Colombian association of mining professionals.

He added that the city regards it an integral part of its economic development role to be involved with the delegations.

“Clearly Sudbury is becoming known globally as a hot spot for underground mining innovation of all types whether it is automation, digitization, autonomous vehicles, robotics and all the various things going into modern mining,” said Rennie.

“Sudbury we feel is a hotspot as well because of what we’re mining. The nickel sulphides is the kind of stuff that is going to help us win the war on climate change,” he added, referencing the growing acceptance of electric vehicles, both for public roadways and mining vehicles.

Rennie said Sudbury is also well regarded for its re-greening success story. The city was once known for its unsightly landscape and smokestacks that generated so much air pollution and acid rain. But in the late 1970s a concerted effort was begun to stop the pollution and regenerate the land and the lakes. Rennie said the story resonates with many countries that have suffered industrial abuse.

“What we’re seeing in the mines is a lot more clean technologies and a lot more environmental remediation technologies coming to the fore now, to both make mining cleaner, to clean up after the fact to get towards that goal of zero emissions.”

Rennie added there are countries around the world that have “distressed environments” from unchecked mining activity. He said delegations are hopeful the problems can be reversed from what has been learned in Sudbury.

Rennie said the cost for Sudbury has been minimal, usually because of partnerships with mining companies and other government agencies. He said on a handful of occasions the city would pick up the cost of a luncheon or the cost of transportation around the city.

“A lot of delegations cost us truly nothing because the costs were covered by the delegation. Sometimes costs are incurred by us. It’s a marketing cost. It’s the cost of doing international business,” said Rennie.

He said the effort at economic development partnerships is paying off for Sudbury. Rennie said the city can track over the long term how specific deals and developments have been made between Sudbury suppliers and international companies, based on the trade delegations.

“In the broader front we see the increase in international business. Not only coming to the private sector but also coming to the universities, to the two colleges; they play a big role here,” he said. He added that the larger companies such as Vale and Glencore appreciate meeting the delegations.

“They always say to me how valuable they are because it is a great opportunity for them to share and learn with other mining jurisdictions. And miners love talking to miners. That exchange happens and they love that,” said Rennie.

“So what we are doing right now when we bring delegations to Sudbury is that we are exposing them to all of these eco systems that the city has developed and top technologies are being developed for industry,” said Gómez, who works out of the Canadian Embassy in Bogotá.

‘Every country has very different experiences. The technical challenges are different in every mine. In the case of Colombia there are a lot of challenges with surface mines as well. So we make people aware of the context their technologies can be applied and taken advantage of,” he added.

“We think it is important for companies and organizations here in Canada to understand those contexts better so they can better perform when they are doing business. It is very important to know your client.”

MORE ON THIS STORY WILL BE FEATURED IN THE DECEMBER ISSUE OF SUDBURY MINING SOLUTIONS JOURNAL.