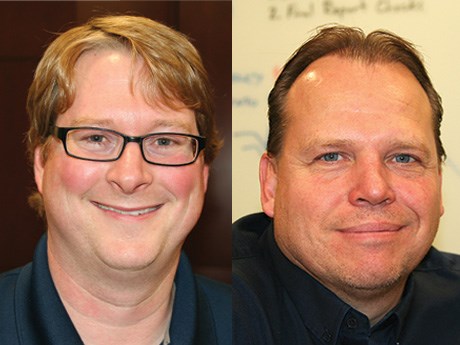 “We did a lot of work around the world with SRK before the merger. That’s how we got to know each other,” said Labrecque. “We really enjoyed working with the people here in Sudbury and other SRK offices, and it seemed like the right thing to do.”

Not having to deal with all the aspects of running and trying to grow a small business when your passion is the work itself was especially appealing.

“The last few years, I had to turn away a lot of work because we were at full capacity and struggling with how to keep growing,” said Labrecque. “Now I can focus on the work and not have to worry about the backend business.”

Born and raised in Sudbury, Labrecque graduated from the University of Waterloo in southern Ontario with a degree in Mechanical Engineering and “lived in a bunch of other places” before realizing that Sudbury is a great place to live and raise a family.

While working for Hatch, he got involved in simulation work and discovered he really enjoyed it.

It was an emerging technology that was prevalent in the manufacturing and automotive industries, but new to mining. “It was something I was really passionate about and that made me excited about waking up in the morning and going to work,” Labrecque confided. “I figured I’m lucky enough to find something I really enjoy. I might as well stick with it.”

Fortunately, “a lot of companies were starting to specify that they wanted simulation done as part of a feasibility study or a pre-feasibility study. People started to see and understand the value it could give them.”

In 10 years, Labrecque says he has worked with more than 36 mining companies around the world – in Canada, the U.S., Australia and South America – and built more than 200 models.

“A lot of the work we do relates to risk mitigation. Mining companies want to see their mine operating (virtually) before they build it.

“Often, a mining company will give us their mine design, the mining methods they want to use and the equipment they plan to acquire. They’ll tell us how they want to move material and the production levels they want to achieve.”

They may want to move 10,000 tonnes per day, but the model will show they can only move 8,000 tonnes, said Labrecque.

SRK could have done simulation too, said principal consultant and practice leader Gary Poxleitner, “but Pierre and his people have so much experience and are extremely good at what they do. They’re the best.”

SRK has its origins in South Africa, but its head office today is in Vancouver, British Columbia. It’s strictly a mining consultancy and operates 45 offices around the world. The Sudbury office grew from 11 to 15 people with the merger and does work globally.

“Most of us in Sudbury have worked in operating mines and have a familiarity with deep mining, base metals and gold, so a lot of other SRK offices are happy to engage us and get the practical experience they may not have themselves,” said Poxleitner.

“We also have a strong francophone presence here, so we do a lot of work in Quebec and northwest Africa.”

With Labrecque and his team onboard, SRK Canada will be able to offer its clients in-house simulation expertise and support SRK offices globally.