ennomotive, ProChile make pitch for collaboration Representatives from ProChile, an organization promoting Chilean exports, and ennomotive , an online hub for engineering innovation linking companies with 15,000 engineers around the world, were in Su
0
Mar 4, 2019 3:18 PM By: Sudbury Mining Solutions Journal 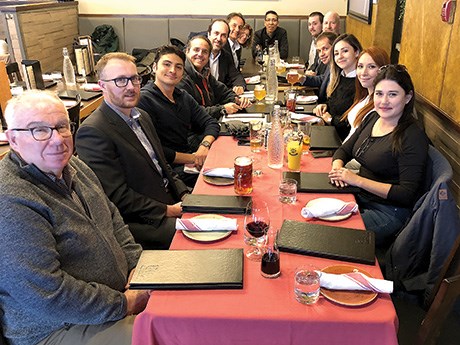 ProChile and ennomotive delegates breaking bread with their Sudbury hosts.

Representatives from ProChile, an organization promoting Chilean exports, and ennomotive, an online hub for engineering innovation linking companies with 15,000 engineers around the world, were in Sudbury November 21 to 23 to forge links with Canada’s mining industry.

The ProChile delegation participated in the Mining Suppliers Trade Association of Canada’s Annual Forum in Toronto November 20th and travelled to Sudbury to meet with research organizations and mining suppliers, including the Centre of Excellence in Mining Innovation (CEMI), NORCAT, Hard-Line Solutions, Ionic Engineering, XPS and Mansour Mining November 21 to 23.

Founded in 2015 by Enriqué Ramírez, an engineer from Spain, ennomotive offers cash prizes to innovators who are able to help companies overcome challenges posted on its website.

In 2017, ennomotive expanded to Chile, where it has helped copper miner Codelco with several challenges.

One challenge invited engineers to develop a crushable rock bolt without detracting from its rock reinforcing capabilities.

“Codelco was suffering productivity losses due to damage that was caused by steel rock bolts introduced into their crushers,” said Ramírez. “They were using magnetic separators, but they weren’t foolproof. They tried themselves to develop a crushable rock bolt using different materials, but they weren’t successful.

“We posted the challenge at the end of 2017 and in six to eight weeks, they had a solution from an engineer in Serbia.

“The challenge of developing a crushable rock bolt that would also be strong enough to reinforce rock seemed to me to be an impossible mission, but it’s now in the process of being introduced in Chile,” said Ramírez.

Another challenge posted by Codelco was aimed at finding applications for a new composite material that was based on copper and graphene. A consulting company was initially hired to assist with the task, but the results weren’t satisfactory.

The posting on the ennomotive site drew responses from 65 engineers in 27 countries with the winning prize of US$15,000 split by three engineers from India, Argentina and Venezuela.

“The chances of solving a challenge may be higher when it’s open to the world,” said Ramírez. “That’s our value proposition.”

ennomotive hopes to continue working with CEMI and building its network of Canadian engineers and companies with problems to solve.