New, used, everything in between – why not? 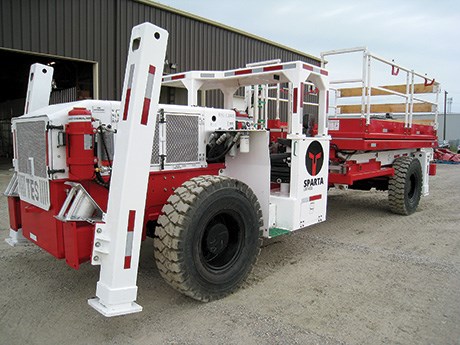 Total Equipment Services (TES) is living up to its name. The Sudbury-based company started off an electrical contractor in 2005, added equipment remanufacturing to its services several years later, and has now made the leap to a manufacturer of its own Sparta line of scissor lifts, boom trucks, transmixers, ANFO loaders and man trucks in both narrow vein and full size configurations.

Owned and operated by Kevin Whynottt – the company operates out of a compact 15,000-square-foot shop in Chelmsford, 20 kilometres north of downtown Sudbury. It employs approximately 50 people on two shifts and is flirting with the export market.

To complement its offerings, it also struck up a distribution deal with Xtreme Manufacturing of Henderson, Nevada, to sell its line of telehandlers to the underground mining industry.

“They can be used for the same applications as a scissor truck, but they’re more mobile, smaller and, therefore, cageable,” said TES president Kevin Whynottt. They can be supplied with a variety of attachments, including forks, man baskets, pipe handlers and buckets.

“We wanted to take their product underground, so we do everything necessary to make them mine ready.”

The partnership was announced at the Mining and Exploration International Conference and Expo September 6 to 8 in Las Vegas at which TES was a key sponsor. The two companies arranged a tour of the Xtreme Manufacturing factory in nearby Henderson, providing conference attendees with an opportunity to learn about the benefits of using telehandlers for the repair and installation of services, and transporting supplies.

TES recently celebrated the sale of its first Sparta scissor lifts and boom trucks to Tahoe Resources in Timmins. The articulated machines are designed for ease of maintenance, operator comfort and safety, said Whynott.

The inspection areas are easily accessible, the operator cab is ergonomically designed and the seating allows for a 360-degree view around the equipment.

TES, said Whynott, is looking at battery-electric power and sees a growing demand for it, but notes “a lot of mines are still buying diesel.”

While new is nice, remanufacturing is still a lucrative business and one that offers mining companies big savings.

In any given year, TES will sandblast away the dirt and grime of anywhere from 25 to 30 pieces of equipment. With a new coat of paint, new powertrain, new hydraulics and wiring, the machines are as good as new.

“Vale, Goldcorp and Barrick also buy refurbished gear,” he noted. “They look at the cost savings too. If it’s 60 to 70 cents on a dollar to buy a rebuild with the same warranty, they’re gonna buy it.”

TES buys equipment from mines across Canada that are closing down or want to get rid of their old fleets and sell them locally, national and overseas.

“The supply is low and the demand is high,” said Whynott. “You put it on the Internet and someone snags it pretty quickly.”

Underground mining equipment can be refurbished two to three times in their lifetime depending on how they are used, he added. “ Some utility vehicles can last 10 years with a couple rebuilds. As long as the frame is in good shape, we have something to rebuild from.”

Electrical contracting accounts for approximately 30 per cent of the company’s overall revenue.

This year, for example, TES worked on a hoist installation for Goldcorp’s Red Lake Mine in northwestern Ontario, and a hoist drive system at Barrick Gold’s Williams Mine in Hemlo.

Most of its electrical service work is focused on Ontario, but TES has also won jobs in Saskatchewan and British Columbia.

“We’ll bid on just about anything, but when it’s busy around Sudbury, we get swamped and can’t bid on jobs far away.”