Labour Minister reveals Ontario Mining industry running as strong as ever Provincial Labour Minister Laurie Scott said the announcement of a new mining research installation in Sudbury shows that Ontario is open for business and open for jobs.
Apr 10, 2019 10:45 AM By: Len Gilllis 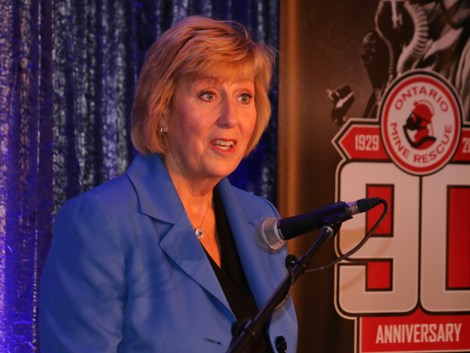 Provincial Labour Minister Laurie Scott said the announcement of a new mining research installation in Sudbury shows that Ontario is open for business and open for jobs.

Scott was speaking in Sudbury Wednesday morning at the opening ceremony for the annual Mining Health and Safety conference hosted by Ontario’s Workplace Safety North. The event is on at the Holiday Inn.

Scott told the conference that mining continues to be a mainstay of the Ontario economy and she congratulated the delegates for their work in keeping the industry operating safely.

She said her ministry was proud to report there were no fatalities in Ontario mines in 2018. Just as important she said was the fact that Ontario Mine Rescue was celebrating its 90th anniversary in 2019.

“That is an incredible accomplishment and not to be taken lightly,” said Scott.

You are all here with one objective; making Ontario’s mines safer.”

Along with being a leading jurisdiction in Canada for mine safety, Scott said Ontario is still the leader for mining exploration and mining production.

“Ontario generated more than $10 billion worth of minerals in 2018 and Ontario’s exploration expenses were $583 million, up eight per cent over 2017,” she said.

Ontario’s mining industry creates more than 26,000 direct jobs and 60,000 indirect jobs. Our province is open for business and open for jobs and the mining sector is critically important to Ontario’s growth,” Scott added.

Scott also said Northern Ontario interests are being looked after by Queen’s Park.

“Since June of 2018 the Northern Ontario Heritage Fund Corporation has invested more than $59 million in 349 different projects,” she said.

One of those was the announcement made Tuesday of $2.6 for the purchase and installation of a new wire rope testing machine that will be used for hoisting in the underground mining industry.

Wire ropes are used to support elevator cages that take workers underground and back to surface, and also for hoisting skip carriers that bring the ore to surface.

The rope testing machine is located at the Materials Testing Laboratory operated by the Ministry of Labour in Sudbury. Mine operators are required by law to submit rope samples to the lab for testing. Half of the ropes submitted are from Ontario. The remainder are from across Canada and the rest of the world. The ministry charges fees to mine operators to test the ropes.

“Rope safety is essential for mine operators to ensure their mines are operating safely and reliably,” Minister Scott said. “This machine will help to keep workers in the mining sector safe across the world.”

After touring the Sudbury rope testing lab, Scott said “it was inspiring really to see the passion” of the workers who ensure that the ropes are maintained safely.

The new machine is set to replace a machine that is 25 year old. The new equipment is expected to be up and running by April of 2020, Scott said.

The Sudbury facility tests mine ropes for every mine in Ontario, as well as for mines and suspension bridge operations across Canada and around the world. There is a fee for testing and this helps to bring in roughly $850,000 revenue for the ministry.