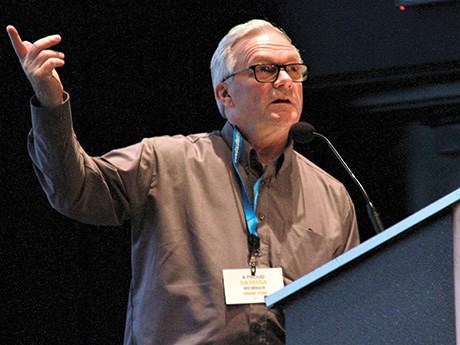 Nickel is projected to be in increasing demand over the next few years – largely thanks to its role in the burgeoning battery-electric vehicle sector. It’s good news for producers like Vale, but as the switch to battery-electric vehicles advances rapidly, one question remains: how can the miner produce enough of the metal to keep up with demand?

“Our biggest concern, actually, is where does the nickel come from,” said Alistair Ross, Vale’s former director of North Atlantic mining operations at the December 10 annual general meeting of the Sudbury Area Mining Service and Supply Association (SAMSSA). “We don’t think we can build the plants fast enough, unless we find alternative, cheaper ways to actually start delivering that metal to market.”

The solution, said Ross, who stepped down from Vale at year-end, is innovation.

Speaking to mining supply and service providers, Ross said Vale is working to digitize every stage of ore production from exploration through to production, and to do so “at the right cost.”

Data gleaned from operations will be a key factor in achieving that, he said. Eventually, Vale believes the technology will be so advanced they’ll be able to read the metal from the drill as it’s going through the stope.

Testing on various technologies is already underway. At Vale’s Garson Mine, north of Sudbury, the company is experimenting with an LTE communication network.

At Totten Mine, west of Sudbury, Vale is running both a teleremote drill and an autonomous scoop. Data collected from the scoop has let Vale develop a predictive model for when components like a gearbox or a bearing will fail.

“In the past, we’ve guessed, taking them out and they’re good, or we didn’t guess and they failed in the field,” Ross said. “The data analytics so far are predicting very close for us so we can get full use out of the components now.”

At its Clarabelle Mill, Vale is using data to better understand error messages that pop up when a malfunction happens during the milling process, such as a stuck valve or a decrease in flow.

Ross said the company’s never analyzed what happens during multiple error states or how recovery follows. With a new system in place, it can now prioritize error messages with the more significant ones getting addressed immediately. Vale is already seeing results.

“What’s fascinating is that we have now seen our way to about a half a per cent increase in recovery just by responding to error states differently than before,” Ross said.

“Now, with data analytics, it’s very clear where we’re going. We’re putting new control loops in place. We will have a little bit of AI (artificial intelligence) attached and start to increase recovery, so we’re very excited about this.”

Vale also expects digitization to make work safer for its employees. The company knows that if it can pull people away from the face, the level of risk drops dramatically, Ross said. And so Vale is looking at ways technology – like the teleremote drill and the autonomous scoop – can improve safety.

Autonomous drones are helping to conduct some of the riskiest work like inspecting dams and pipelines. Currently, the company sends an employee out in a truck to do the inspections, but drones could alleviate that task. They’ve also used drones to inspect stopes underground.