They are huge, they don’t always go smoothly and, when the wheels come off, someone has to fix them.
Sudbury Mining Solutions Journal Jun 1, 2007 1:00 AM 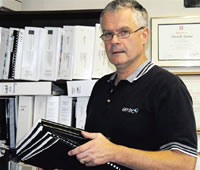 They are huge, they don’t always go smoothly and, when the wheels come off, someone has to fix them. Environmental assessments can involve multiple government jurisdictions, fierce opposition from stakeholder groups, lengthy delays and rigourous reviews.

Dave Lemon, a senior associate with AMEC’s Earth and Environmental Group, has seen more than his share of environmental assessments (EA), closure plans and related studies. Based in Sudbury, Lemon lives out of a suitcase a third of the year, either co-coordinating EAs or pitching in to get them unstuck. He has worked on major assignments across Canada from Labrador to Nunavut and overseas in Central America, Indonesia and New Caledonia.

His bookshelves groan under the weight of thick, multi-volume binders detailing the migration habits of moose and caribou, the potential impact of a mine on rare plant species and the flow of groundwater.

AMEC’s Earth and Environmental and Mining and Metals groups in Eastern Canada are based in Mississauga and Oakville, just west of Toronto. Staff at both offices, and at AMEC’s Mining and Metals group in Vancouver, oversaw the EA for the De Beers Victor project, a diamond mine currently under construction in Ontario’s Far North. In Sudbury, AMEC’s 25 engineers and technicians offers a wide variety of hydrogeology and geotechnical services to industry and local government, “and then there are a few odd ones like myself,” said Lemon.

From his base in Sudbury, Lemon works closely with CVRD-Inco, but many of his assignments for the company have been focused overseas at its Goro project in New Caledonia, at its PT International Nickel subsidiary in Sulawesi, Indonesia and at its former Exmibal operation in Guatemala.

The EA process in Canada can be costly, time-consuming and frustrating for mining companies anxious to get their shovels in the ground, but from Lemon’s international perspective, they are relatively easy because everything is spelled out in provincial and federal legislation. “The expectations are fairly clear, detailed and transparent,” he said.

Irritants arise from the overlap of federal and provincial jurisdictions – especially when the two levels of government are unable to come up with a harmonized process – and from bureaucratic delays. However, Lemon notes that “things take time and bureaucrats are busy.”

The first step in the EA process, he explained, is to sort out what the issues are. Then comes the baseline study, a detailed accounting of fish and wildlife, as well as air and water quality.

“You have to have a good understanding of your baseline environment to have confidence in and understand the implications a project will have on the environment,” said Lemon. “That’s what it all comes down to.”
Wastewater and drainage, air emissions and noise are all taken into consideration. So are the socioeconomic implications of a new mine.

“Drilling for groundwater is a huge part of the exercise because these samples are really expensive to get. Then there are the spruce and moose studies. We look at everything from songbirds and fur-bearing animals to large game. You have to describe the adverse residual effects on anything that comes out of the issue scoping exercise.”

In Canada, the ecosystem is relatively simple, but in tropical and sub-tropical areas, plant and bird species are much more diverse.

“In the sub-tropics, you get some plant species that occur in one river valley and nowhere else, so the focus is on documenting all of them,” said Lemon. “Inco has been involved for 10 or 12 years trying to collect these rare plant species and propagating them to get ready for site reclamation and closure that may not happen for another 15 years.”

Consultations with community stakeholders, especially Aboriginal communities affected by a proposed mine, are critical to the success of an EA.

Getting the science right is rarely a concern, said Lemon.

“The most important thing is making sure you have conducted a very transparent and logical consultation process with the community, special interest groups, stakeholders and Aboriginal groups. Listening to people, keeping people informed and making adjustments to the project to take their concerns into consideration are a huge part of the process.”

To avoid interfering with the seasonal migration of a caribou herd, for example, consultants might recommend posting signage and speed limit restrictions on mine access roads.

Aerial surveys are conducted to estimate moose and caribou populations, and radio or satellite collars are used to track the movement of bears. EA teams can even include archeologists if there are concerns about the impact of a mine on burial grounds or sites of archeological interest.

Despite being time-consuming and costly, EAs serve the mining industry’s and the public’s interest in limiting any adverse impacts on the environment. They can be rigourous and frustrating, but they help to ensure that the mining industry has the social license required to supply the world’s growing appetite for mineral resources.