Mining safety in Sudbury conference hears a warning about commonly used batteries By LEN GILLIS Red flags have been raised about the possibility of lithium ion tool batteries catching fire in industrial settings such as mines.
Apr 18, 2019 1:37 PM By: Len Gilllis 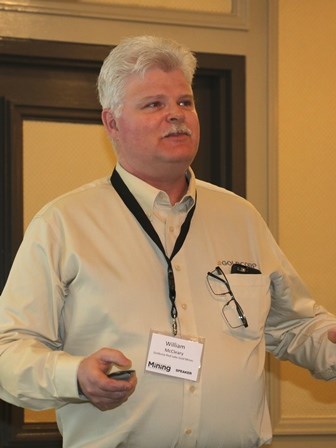 William McCreary, safety supervisor at Red Lake Gold Mines, told a mine safety conference in Sudbury that new procedures are needed for storing and charging lithium ion tool batteries. This follows a fire that occurred at the Red Lake Mine in December. LEN GILLIS / Sudbury Mining Solutions Journal 2019

Red flags have been raised about the possibility of lithium ion tool batteries catching fire in industrial settings such as mines.

This follows a presentation made to the Mining Health and Safety conference hosted by Workplace Safety North in Sudbury in April.

The presentation came from safety representatives from Goldcorp’s Red Lake Gold Mines who reported on an underground fire that took place just last December 6 when three workers went to get their tools on the 4400 level storage area.

“When the workers arrived, they smelled smoke,”  said mine rescuer Loye Halteman.  One of the workers was sent back to a refuge station to notify security to “stench the mine”;  thus releasing stench gas to notify all workers on every level there was a fire.

The two other workers entered the storage area with a couple of 10-pound fire extinguishers to investigate.  They discovered a large area of flame by one wall.

“The workers attempted to extinguish the fire with the fire extinguishers. It increased the smoke and they couldn’t put it out,” said Halteman.

The fire area was inside a storage bay behind an eight-foot high steel partition wall. As it would turn out, the fire was being fueled by a stack of lithium batteries and chargers used for hand-held power tools.

He said the workers retreated to the refuge station to wait for help and shut off all the power in that area.  Mine rescuers arrived shortly after and using a thermal camera, discovered there were significantly high heat indicators in the storage area.

A ventilation door was opened to help clear the air. The first rescue team returned to surface. The second team arrived to use water hoses to cool down the area.

The fire was knocked down by 2:10 a.m. It was nearly 3 a.m. – more than eight hours after the fire was discovered – before the heat had dropped to a safe level, Halteman said.

He said it was eventually decided to ask an outside investigation team to determine what had happened.  Origin and Cause, a forensic consulting team was called in.

Safety supervisor William McCreary said lithium fires are something new, but it’s not something anyone wants to get rid of because portable tools are so useful and convenient.

“You can’t just throw all these tools out of the industry overnight just because of one specific incident,” he said.

Going back to the day of the fire, McCreary said through a series of interviews with the investigators it was learned that several workers had borrowed tools during the day and then at the end of the shift, returned the tools and the batteries to the storage area.  It was learned that at least two lithium batteries were placed on charge.

The charging station was a wall-mounted steel frame device with wooden shelving.  It  was about a metre wide by half a metre high. There were four charging devices were on the top shelf. The second shelf held a supply of 30 to 40 lithium batteries.

McCreary said it was learned that if a lithium battery is dropped, it could force internal metal contacts to touch each other, and that could cause the battery to overheat and catch fire with 30 minutes to an hour. He said it is not known if that happened.

“It was the whole component of it all. It was a disaster waiting to happen basically when you have something like that where all those components start to make heat as its charging,” he said.

“They know the origin was that location. The fire had started in the charging station, either a battery, a charger or a power strip or a plug in or an extension cord,” he said.

The fire began on the top shelf and burned down through the second shelf where the stacks of batteries continued to fuel the blaze, said McCreary.

McCreary said it was learned that if the batteries had been stored separately from the chargers, it likely would have lessened the impact of the fire.

Among the recommendations, said McCreary, is that mine sites should have steel storage cabinets, with a built-in power breaker that will shut off if there is any excess heat. He said it is something that will have to be custom built because there is nothing on the market at this point.

McCreary added another concern is that a normal dry-chemical ABS extinguisher will not work. The fire would flare up bigger, he said. He said the solution is to purchase additional Class-D extinguishers which will cut off the oxygen supply immediately.

McCreary told the audience that all mine sites and mine rescue stations need to be made aware of the possibility of lithium battery fires.