Taking teleremote to a new level

Musselwhite grows Ops Centre in Thunder Bay Goldcorp Inc .’s Musselwhite Mine is working toward becoming a full-fledged smart mine with all the safety, cost-savings, and other benefits that come along with it.
0
Aug 20, 2018 11:48 AM By: Sudbury Mining Solutions Journal 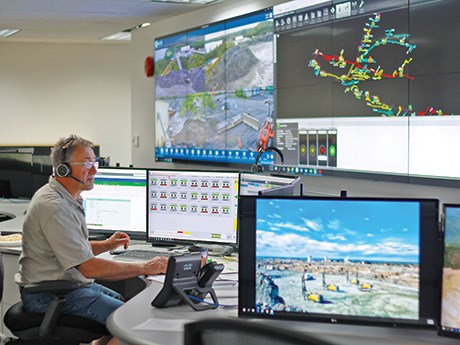 Musselwhite communications supervisor Robert Marchese directs operations from a control centre in Thunder Bay, 500 kilometres to the south of the mine.

Goldcorp Inc.’s Musselwhite Mine is working toward becoming a full-fledged smart mine with all the safety, cost-savings, and other benefits that come along with it. Its new Integrated Remote Operations Centre (IROC), which opened in Thunder Bay in June, allows operators, communications/dispatch personnel and supervisors to work at the mine virtually.

Peter Gula, Musselwhite’s mine general manager, said that the most dangerous work such as loading and rock breaker operations are performed teleremotely. New technology including fibre-based networking has allowed the company to physically move operators out of the mine and into an office building in Thunder Bay, 500 kilometres to the south.

“I’ve had this vision of trying to get as many people offsite as possible,” said Gula, who transferred to Musselwhite in 2015 from Red Lake where he worked for 27 years. “Every person that we have up at site has about a $40,000 a year cost associated with it. That includes travel, housing, and all the staff and services that go to support the people working at Musselwhite.”

The company started moving non-producing positions such as payroll, administration, and some HR to Thunder Bay in April 2017. In June 2018, dispatch personnel and some machine operators moved to the new control centre. The near-term goal is to move about 60 people to Thunder Bay, which would reduce operational expenses at Musselwhite Mine by $2.4 million per year.

There are other considerations besides cost savings, Gula said. Safety is an important one. “First and foremost, we’re removing people from those hazardous conditions.” A system that allows operators to control the machine from an office 500 kilometres away would completely eliminate risks inherent to mining underground. “That’s the best way to control it.

You engineer out the problem – you don’t even put them in that environment.”

It also eliminates travel time, which currently is about an hour and a half each way from the top of the portal to the bottom of the mine. Gula said that Goldcorp has used teleremote operating stations at Musselwhite for about a year on surface at the mine. Bringing that chair to Thunder Bay takes teleremote to a new level.

The system takes advantage of fibre connectivity. Lag time is low, with a reported maximum lag of 20 milliseconds or 0.02 seconds, which operators can easily compensate for. A live demonstration in the IROC showed no obvious lag time while an operator worked a rock breaker.

The plan over the next six to 12 months is to connect more machines to the teleremote system. Horizontal and vertical drills will be connected along with some of the trucks. “There will be dedicated routes that will be completely (navigated) teleremotely so that you can haul when there is nobody underground,” Gula said. In the near future, some trucks will be semi-autonomous, self-driving predetermined routes with the operator only needed for loading and unloading.

The teleremote equipment is provided by Hard-Line Solutions, a heavy equipment remote control supplier based in Sudbury.

The main limiter to implementing technology is the human interaction with it, not the technology itself, noted Gula.

“We’ve had some really good people come in and address change management and get our employees engaged so that they are part of the process of going to this next level. We’re lucky – we have a great culture that embraces technology.”

Dispatch is another area greatly improved by new technology. Musselwhite recently installed some modules from OptiMine software that allows the communications supervisor to track employees and equipment on a digital map and talk directly with everyone as needed. Another important advantage of the system is that the supervisor can talk over all channels at the same time – something the previous system could not accommodate. This would be especially useful in emergency situations.

Improved work/life balance is another advantage of a teleremote system. “What a great motivator for a gold miner to be at home every night,” Gula said. It’s something he hopes will change gold mining culture and bring more workers and their families to Thunder Bay. Many of the 550 full-time employees and 300 contractors come in from out of town.

Gula said that the move toward autonomous systems and increased efficiencies will not eliminate positions, but allow the mine to do more with the people they have – and keep them safer. Some roles such as maintenance would necessarily remain onsite.

READ: Another blockbuster issue of SMSJ