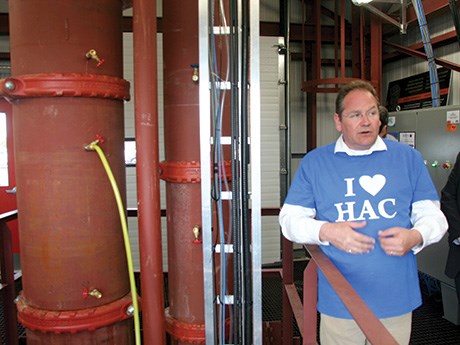 Hydraulic air compressor can slash cost of pneumatic power, cool deep mines and serve as a means of carbon capture.

Hydraulic air compressor can slash cost of pneumatic power, cool deep mines and serve as a means of carbon capture

A long-forgotten, century old technology for producing compressed air is one step closer to rebirth. On June 21, a who’s who of politicians and mining industry representatives came together for the official opening of a hydraulic air compressor demonstrator at Dynamic Earth, site of the Big Nickel in Sudbury.

Modeled on the Ragged Chutes hydraulic air compressor designed by Charles Havelock Taylor in 1905 to serve the pneumatic power needs of some 30 mines in the then-booming Cobalt mining camp in northeastern Ontario, the demonstrator will provide Sudbury-based Electrale Innovation Ltd. with the energy saving evidence it needs to commercialize the technology.

Air and water are mixed in a tank at the top of the hydraulic air compressor, or HAC, and sent down a pipe.

“As the water descends, it becomes pressurized and that pressure is transmitted onto billions of air bubbles,” explained Dr. Dean Millar, project principal investigator, president of Electrale and director of energy, renewables and carbon management at MIRARCO Mining Innovation. “When the bubbly flow gets to the bottom, it enters a separator vessel that separates air from water. The air is piped up to surface or off to the demand for pneumatic power – whatever that might be – and the water ascends and is recirculated.”

Millar predicts the HAC will produce pneumatic power for 60 per cent of the lifecycle costs of incumbent mechanical compression systems. Fewer moving parts also means lower maintenance costs, and the air that’s produced is both oil-free and drier.

“The clever thing that Taylor came up with when compressing air with water was that the water simultaneously cools the air,” said Millar. “When you use a mechanical air compressor, unless you take special measures, the air that comes out is going to be hot.

“What this means is that we have a process of gas compression that is the most energy efficient conceivable. You can’t have a gas compression process that consumes any less energy than an isothermal one. When I realized that, I thought, holy smokes, this technology is special.

“The most energy efficient process naturally leads to minimal cost, meaning we can compress the same amount of air for less money. And minimum cost for a mining company means that mining company will be more competitive.”

In addition to efficiently producing compressed air, the HAC also has potential to be used for deep mine cooling
Millar resolved one potential drawback to the efficiency of the HAC over burgers and beer with a friend.

Some of the air will dissolve in the water, reducing the amount of the compressed air produced. “Taylor didn’t care because he was using renewable energy, but we’re recirculating water with a pump, so if we lose some compressed air due to this solubility effect, it’s bad news because it challenges our economics.”

In an aha moment he delights in recounting, Millar, who came to Canada from the U.K. in 2010, watched as his friend performed a Canadian ritual.

“He did something that I have never seen anyone do before in my life. He got hold of a salt shaker on the table and poured salt in his beer. I looked at that and said, ‘Oh, my God, that’s the HAC. All I have to do to increase the yield of compressed air is dissolve salt in the water that I recirculate through the system and the chemistry will stop the gases dissolving in the water.’”

For the compressed air application, the solubility factor is a problem to be overcome, but Millar believes it can also serve as a means of carbon capture.

“Instead of air, we can introduce carbon dioxide and nitrogen to simulate flue gas,” said Millar. What happens is the carbon dioxide dissolves preferentially in the water and bypasses the separation process, so we’re left with the nitrogen, which we can sell. The water returns to the top, where the dissolved carbon dioxide can be captured at low pressure.

“We’ll be moving on to that work in a year or so,” said Millar.

“It took a lot of hard work, a fantastic team effort from all the project partners, all the project supporters and the manufacturing, fabrication and installation muscle of the Sudbury community,” said Millar.