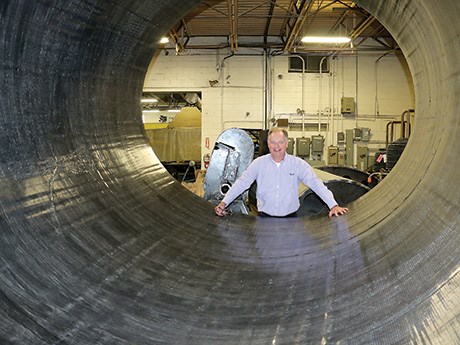 Innovative products and enhanced customer service are just a couple of reasons why Schauenburg Industries Ltd. of North Bay continues to be a success story in Northern Ontario’s mining service and supply sector after half a century in operation.

The company has been part of the North Bay industrial scene since 1969 and was established to provide ventilation solutions and convenient transportation to Northeastern Ontario’s mining operations. The company now services the mining and tunneling industries across Canada.

Managing director Don Croteau (P.Eng) said the company’s 50th anniversary in North Bay is a portent of good things to come as he is anticipating an increase in business to coincide with an upswing in mining.

Croteau seems to have the same sense of optimism that inspired Hans-Georg Schauenburg, a German entrepreneur, to open the North Bay operation with a 6,000-square foot plant to manufacture his own brand of ventilation products to serve the Canadian mining industry.

Over the years, in the 1980s and again in 2010, the North Bay operation expanded to more than 24,000 square feet to include new manufacturing and office space, and a new warehouse.

One of Schauenburg’s innovations was a rigid fiberglass ducting product, for which it is the sole Canadian supplier. More recently, the company developed an interior lining for the rigid ducting to enhance airflow.

“Years ago, energy prices were a lot lower, but electricity costs have gone up, so industry is looking for energy savings.” said Croteau.

“We worked with the federal government’s Industrial Research Assistance Program and over a period of a couple of years we made changes to our fiberglass ducting, including re-launching it as a brand new product called K-Max.”

Croteau explained that the K-factor is a measurement of airflow efficiency. “That was a big deal because of the energy costs. We improved the smoothness of it,” said Croteau.

The next step was to find a better way to transport the ducting because the pieces were so bulky they were basically shipping large tubes of air.

“So we looked at tapering them slightly, so they could be stacked like coffee cups,” he added.

The rigid ductwork is designed for permanent installations, but the airflow energy savings from K-Max are such that Croteau is hoping to convince mines to consider installing K-Max rigid ducting as an alternative to flexible ducting.

“We launched the product in March 2018, so we’ve only been working to sell it for under a year,” said operations manager Elizabeth Fournier.

The selling process can take a while, said Croteau. He said many companies get used to a certain product and it can take time to change their minds. But he said his ace in the hole is the cost savings – something all mine managers are keen about these days.

Another selling point for Schauenburg’s rigid ducting is the fact that it can be configured in the traditional round shape, or in an oval shape.

Croteau said oval ducting saves space underground because it hugs the back of a drift.

“It’s been around for about 20 years but I do notice there is more oval (ducting) in the last few years. I think that is because it’s less development costs in the drift. If you can make the drift six inches or a foot shorter, there is a big money saving,” said Croteau.

The innovation over the years had paid off. Schauenburg flex tube ventilation systems and the K-Max rigid ducting can be found in mining operations throughout Northern Ontario, northwestern Quebec and across Canada.

Currently, the company is operating one shift daily with 26 employees, but the workforce can be increased if there is an urgent demand for more product. He recalled one incident a few years ago where the workforce was bumped up by another 25 workers and production was ramped up to three shifts around the clock in response to an order from a diamond mining operation.

“They needed this huge order, all to be made within two months,” said Croteau. This was because the order had to be shipped by trucks over an ice road in the Western Arctic.

“It was going very well. And then just like that, the mine shut down. There was no warning. Just a phone call. That was it,” said Croteau.

“We learned a lot through it all though. In some ways it was good, because when it was all finished, we regrouped and decided what we could have done better,” he said.

“So now we have put things in place so that when our business grows and things begin to pick up – and we know that things are starting to pick up – there are things that we’ve changed and we will be a lot better equipped to handle it,” said Croteau.