Fireside chat style interview with PDAC president Despite his troubles on other sectors of the political front, Prime Minister Justin Trudeau was warmly welcomed by a couple of hundred delegates at the annual Prospectors and Developers convention (PD
0
Mar 7, 2019 12:38 PM By: Len Gillis 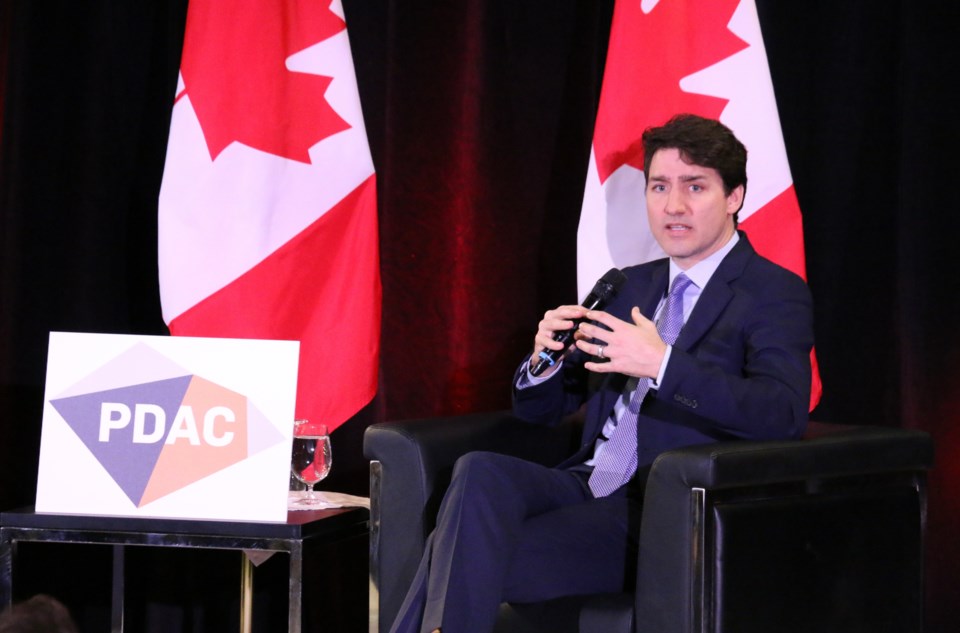 Prime Minister Justin Trudeau made a brief appearance at the Prospectors and Developers convention (PDAC) in Toronto Tuesday to take part in a friendly question and answer session with PDAC president Glenn Mullan about mining and mineral exploration issues. There were no questions from the floor and no mention of any of the controversy surrounding the SNC-Lavalin issue. LEN GILLIS / Sudbury Mining Solutions Journal 2019

Despite his troubles on other sectors of the political front, Prime Minister Justin Trudeau was warmly welcomed by a couple of hundred delegates at the annual Prospectors and Developers convention (PDAC) in Toronto this week.

About 200 convention goers and party members were packed into a secure meeting room where admittance was by invitation only. Among those on hand to greet the PM was Sudbury MP Paul Lefebvre, the parliamentary secretary to the Minister of Natural Resources.

Trudeau was greeted on the stage by PDAC president Glenn Mullan where they took part in a brief question and answer session.

Mullan described it as having a fireside chat without the fire.  He said it “was such a delight” to have prime minister attending the convention. Mullan thanked Trudeau for the recently announced five-year extension on the Mineral Exploration Tax Credit.

He asked why the PM thought it was important for the Liberals to make the announcement for a five-year period, since it is the first time the tax credit has been extended beyond a single year.

Trudeau said it wasn’t necessarily just about the mining industry, but for industry in general to allow for more long term planning.

He said it would provide the industry with a bit more stability and predictability. He said this would enhance trade and investment in Canada.

Trudeau and Mullan also spoke about the importance of Indigenous partnerships. Trudeau said while most non-Indigenous Canadians are serious in their support of partnerships and reconciliation, the federal government could be performing better.

“The government hasn’t done a very good job over the past years of creating those partnerships. You know who has in many cases? The mining industry. You all have been at the forefront of partnerships, of cooperation, of working together with Indigenous peoples,” said Trudeau.

The discussion, lasting about 25 minutes, also touched on such things as innovation, technical change and the environment. There were no questions from the floor or from the two dozen or so media persons present.

There was no discussion on the issue surrounding SNC-Lavalin and the resignations of cabinet ministers Jody Wilson-Raybould or Jane Philpott. Trudeau met with several of the audience members, shook hands and posed for a couple of selfies. In less than five minutes he was whisked out of the room.

In a news release issued following Trudeau’s appearance, PDAC said it was honoured to have hosted the PM.

“We very much appreciate that the Prime Minister joined us at our iconic PDAC Convention to discuss the challenges and opportunities faced by Canada’s minerals sector, and the best ways to move forward in collaboration,” said Mullan in the release