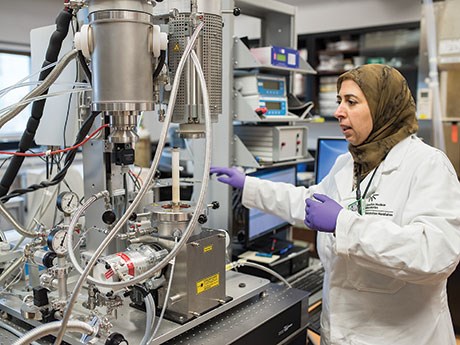 Canadian Nuclear Laboratories is investing in new equipment and facilities to support the needs of SMR developers. One program, for example, is designed to measure the properties of molten salts – a potential fuel for future SMR designs.

Bruce Power, operator of Ontario’s Bruce Nuclear Generating Station, has agreed to fund an Industrial Research Chair at MIRARCO Mining Innovation in Sudbury to study the long-term potential for small modular reactors (SMRs) for the generation of “clean, low cost and reliable electricity for rural and remote regions,” including mining operations in northern Canada.

“Electricity costs are driving investments out of Ontario and the nuclear industry has a solution for us, especially for remote mining operations,” said MIRARCO president and CEO Vic Pakalnis. “A small modular reactor can be moved into place on skid or ice road and left there for 30 years. At the end of the life of mine, it can be taken out and brought back to Bruce Power for refurbishment.

“The nuclear industry hasn’t really seen the mining industry as a customer for this technology, but it’s perfect.”

A soon to be announced MIRARCO-led consortium of five companies– two with operations in the Arctic, two in Ontario and one operating outside Canada – will assist in evaluating the business case for SMRs, said Pakalnis.

“Right now, some of the most remote northern communities are serviced by diesel generators and other unsustainable methods that could be replaced by small modular reactors, or other low-carbon energy sources,” noted Bruce Power president and CEO Mike Rencheck. “Bruce Power wants to be at the forefront of nuclear power’s future, and by joining forces with the sustainable energy research community, we can help to guide and focus their efforts as SMRs become a viable option.”

Canadian Nuclear Laboratories (CNL) in Chalk River, 183 kilometres northwest of Ottawa, is also working to advance the development and commercialization of SMRs. In April, CNL issued an invitation to SMR project proponents around the world to demonstrate their technology at Chalk River or another CNL site.

“CNL is proud to extend this invitation to SMR project proponents from around the world, and to take one of the most important steps towards the successful deployment of a small modular reactor in Canada,” said Mark Lesinski, CNL president and CEO.

“CNL is uniquely positioned to support the development of this technology… thanks to our experience in Canada’s regulatory environment, our well established compliance programs, fully-equipped laboratories and our expertise in all areas of nuclear science and technology.”

One of the factors driving interest in SMRs, she said, “is the realization that the nuclear industry has to do something different to become economically competitive with other forms of power generation.”

Modular reactors are smaller than conventional nuclear generating stations and will be constructed using a modular approach and economies of scale in a factory setting, then transported to the location where the power will be used.

SMRs can range in size from less than 1 megawatt in power capacity to 300 megawatts, compared to current nuclear generating stations rated at between 800 and 1,000 megawatts. A typical mine would require a reactor producing approximately 30 megawatts, said Hyland.

While remote Indigenous communities and mines forced to use diesel generators are the likeliest potential beneficiaries of SMRs, on-grid applications are also possible where new capacity or a cleaner, low carbon, low greenhouse gas emitting source of energy is required.

Hyland estimates there are more than 100 companies and organizations around the world currently developing SMR technologies, including some in Canada.

CNL, which is focused on science and technology as opposed to engineering and design, isn’t developing SMR technology itself, but is positioning itself as a global leader in SMR prototype testing and technology development support.

The current invitation has a deadline of May 28th, but CNL expects to issue invitations semi-annually. “As companies develop their projects and get to the point where they’re looking for a site to demonstrate their technology, they’re welcome to apply,” said Hyland.

“This is a great opportunity for Canada to re-establish ourselves as a leader in the nuclear industry worldwide,” said Hyland.

Pakalnis, who was the sole representative of the mining industry at the 8th annual International SMR and Advanced Reactor Summit in Atlanta March 27 and 28, sees MIRARCO as a bridge between the mining and nuclear industries.

“Both industries are victims of a bad reputation,” he noted, “yet nothing could be further from the truth. They are among the safest industries in the world.

“The only way we can deal with climate change and the Paris Accord is if we have nuclear because it produces zero greenhouse gases.”