Northern Ontario mining suppliers will have a bigger presence than ever at this year’s PDAC.
Feb 22, 2017 4:10 PM By: Sudbury Mining Solutions Journal 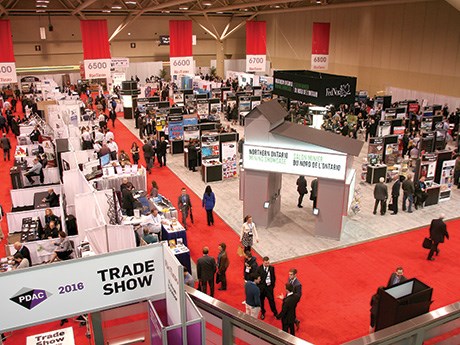 Northern Ontario mining suppliers will have a bigger presence than ever at this year’s PDAC. The Northern Ontario Mining Showcase in the Metro Toronto Convention Centre’s North Building will include 90 companies from across the region in 9,800 square feet of exhibit space.

“Last year, we had 72 exhibitors. The year before that, we had 56 and in our inaugural year, we had 36, so we’ve seen a steady improvement. We have also expanded in terms of the space we occupy this year, growing an additional 2,000 square feet.”

Companies participating in the 2016 showcase reported concluding 133 new partnerships, generated sales of close to $7 million and created 66 new jobs as a result of contacts they made. Just under 80 per cent of exhibitors reported making new sales.

A Northern Ontario Reception will be held Monday, March 6th at the Steam Whistle Brewery across from the South Building beginning at 5 pm. Passes for admission can be picked up at the Showcase in the North Building. The Northern Ontario themed event will feature Loon Vodka from Hearst, cheese from Thornloe and the Fromagerie Kapuskoise in Kapuskasing, and a Northern Ontario band.

“Ontario will have a lot to talk about on the tradeshow floor this year at PDAC,” said Minister of Northern Development and Mines Michael Gravelle.

“Over the past year our government has led important work to implement Ontario’s Mineral Development Strategy – our 10-year blueprint designed to make Ontario the world leader in sustainable mineral development. In 2016 we hosted a Mining Innovation Summit that brought together leaders in the sector to foster partnership and innovation. We launched the Junior Exploration Assistance Program, which has supported more than 50 exploration projects across Ontario. And in the Fall, we introduced legislation that, if passed, will allow us to complete the modernization of the Mining Act and implement a new system for online claim registration. I look forward to this important event each year because of the great opportunity it presents to showcase Ontario’s strength as the top mining jurisdiction in Canada and a global leader, and to connect with investors looking for new opportunities in the sector.”

An Ontario reception, hosted by Michael Gravelle will be held at the Steam Whistle Sunday night, March 5th.

Andrew Cheatle, executive director of the PDAC, expects attendance at this year’s event to be equal to or greater than last year’s 22,122 delegates. Attendance peaked at 32,000 in 2012 during the height of the commodity boom.

Northern Ontario’s Peter Moses will be presented with the prestigious Skookum Jim Award at this year’s PDAC Awards Gala, to be held Tuesday, March 7th, 6 to 11 pm at the Fairmount Royal York. The award is presented annually to a Canadian Aboriginal who has made a significant contribution to the mining industry.

Moses began prospecting as a young man in the Pic River-Marathon area and successfully promoted, negotiated and executed 34 option agreements over his career. He worked for the Ministry of Northern Development and Mines for many years offering prospecting, staking and geoscience training workshops to 123 of the 134 First Nation communities in Ontario and is currently a mineral development information officer with the Matawa First Nations, which represents nine First Nation communities in Northern Ontario.

On Monday March 6, from 3 to 5 pm in Room 203B, North Building, the Centre for Excellence in Mining Innovation will host an event called “Ten Years of Driving Innovation” to showcase the companies it has worked with and the technologies it has helped to introduce to the mining industry.

This year’s PDAC will also feature #DisruptMining, an event organized by Goldcorp and Integra Mining aimed at showcasing new technologies capable of revolutionizing the mining industry.

On Sunday March 5th, participating companies will showcase their industry changing technologies at a #Disrupt Mining Innovation Expo to be held from 1 to 4:30 pm at The Carlu, a 7th floor event space at College Park, 444 Yonge Street, corner of Yonge and College.

Five companies judged to have the most promising technologies will pitch their idea in front of a live audience of 400 industry leaders and a “Shark-Tank” style panel of industry execs beginning at 5 pm. The winner will receive an investment of up to $1 million to develop the technology or for a proof of concept at one of Goldcorp’s mines.

The deadline for receipt of applications was January 18. Tickets for both the daytime expo and the evening “Shark-Tank” style live finale can be obtained by emailing [email protected]