Dundee Precious Metals selects Sudbury-based Symboticware to market Wi-Fi communication infrastructure Operating an underground mine with real-time awareness of the entire production process has had its challenges, but a new partnership between Dunde
Aug 22, 2016 2:59 PM By: Sudbury Mining Solutions Journal 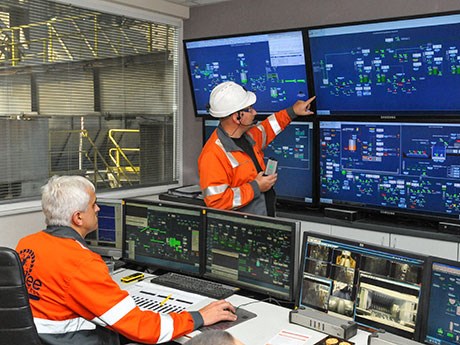 Operators in the control room at Dundee Precious Metals’ Chelopech copper-gold mine in Bulgaria have real-time awareness of workflow made possible by mine-wide Wi-Fi connectivity.

Operating an underground mine with real-time awareness of the entire production process has had its challenges, but a new partnership between Dundee Precious Metals and Symboticware Inc. offers new hope for mining companies eager to take full advantage of the digital revolution.

Dundee Precious Metals, a Toronto-based mid-tier company, operates one of the most technologically advanced underground mines in the world. The Chelopech copper-gold mine in Bulgaria, of all places, is a fully connected operation offering management the same real-time operational awareness that’s standard fare in advanced manufacturing.

Keen to monetize the technologies it developed in-house, Dundee Precious Metals is partnering with Sudbury-based Symboticware to make them available to the rest of the industry.

Mine-wide connectivity has until now been difficult to achieve in an underground mining environment, both because of the great distances to be covered and the cost of Wi-Fi access points. Instead of relying on expensive, commercially available hardware, Dundee Precious Metals licensed Cisco technology to develop its own much less costly Wi-Fi boxes and repeaters.

“The moment you bring the price down, you can increase your Wi-Fi footprint underground,” said Symboticware president Kirk Petroski. “What that means is you can now afford to install more Wi-Fi access points. You can create better connectivity and create a real-time mine environment.”

A lot of underground mines have wireless connectivity, but at US $5,000 to $6,000 for a commercially available Wi-Fi access point, mines have only installed a limited number of them – in dump zones, refuge stations and fuel bays, for example – precluding mine-wide connectivity and the ability to monitor activity and manage with real-time data. Wi-Fi may be available in major arteries of a mine, but not at the face.

“When the operator loads up a bucket, we know (on surface) it’s an eight-yard scoop with X amount of ore in there,” said Petroski.

Eschewing commercially available ruggedized tablets, which can cost anywhere from $2,000 to $3,000, Dundee Precious Metals came up with its own ruggedized enclosures for basic tablets they could purchase for a fraction of the cost.

If they get damaged and have to be replaced, it’s no big deal.

Add push to talk Voice over IP, tracking, and 3D scanning by autonomous drones, and it’s easy to understand why the mining world is looking to Chelopech as a model for the mine of the future.

“Mining underground has traditionally run on the basis of verbal reporting of progress through the shift via radio communication and end of shifts paper reports,” said Rick Howes, president and CEO of Dundee Precious Metals. “That methodology is pretty archaic in this modern era. In manufacturing, there’s real-time awareness of everything going on with a process and any interruption of the process, so there’s very tight management.

“We now have the same ability as manufacturing and other industries,” said Howes. “We have certain tasks and activities that have to get done and can track them in real-time. If we see things getting off track, we can intervene.”

Paper data can’t be relied on, said Howes, because of the b.s. factor.

Real-time oversight has paid off at Chelopech.

“We’ve doubled our production in the last four years and cut our costs in half,” said Howes. “We use less equipment than we would have because there’s higher utilization of the equipment and tighter control of activity. We don’t have a lot of waste and inefficiency in the process. We’re aware of the cause of delays and the opportunities to improve the way things are done.”

One of the key enablers for Chelopech’s technology leadership is the role played by Dundee Precious Metals’ IT department led by Mark Gelsomini, corporate director of information technologies.

A computer engineer with a degree from the University of Toronto, Gelsomini joined Dundee Precious Metals in 2008 with zero experience in the mining industry.

“You won’t find another IT guy like Mark in any other mining company,” said Howes. “IT guys usually live in a world of their own. Their main focus is to support information systems management at the corporate level. They don’t see their role as improving business performance. Mark has a different view of IT.”

As a newcomer to the mining industry, Gelsomini saw a huge opportunity to leverage technology, think out of the box and come up with alternatives to the expensive, proprietary solutions on the market.

“What we’ve done at Dundee Precious Metals is break down the barrier between the carpeted and non-carpeted environments,” he said. “IT and operations work together on innovation. At a lot of mining companies, that’s not the way it works.”

The success Dundee Precious Metals has achieved is also indicative of how much easier it is to effect change in a smaller company.

“I worked in the Canadian mining industry for 30 years before going international,” said Howes. “I worked for Falconbridge for 15 years and was with Inco and Vale for eight years (in Sudbury). It was a great experience, but making change was very difficult. There were both management and union-related roadblocks. I ran a lot of the mines in Sudbury and tried to implement many of these ideas when I was there, but it was much harder.”

Bulgaria isn’t as unlikely a location as one might think for leading edge technology.

“At the end of the day, we’re a Canadian company and we bring Canadian knowledge and expertise to the operation, but despite being under Communist rule for 44 years, Bulgarians are well educated and highly motivated,” said Howes.

“Chelopech wasn’t very modern when we acquired the property in 1999, but we quickly brought them up to the standard of a Canadian mine. Bulgaria has a strong mining culture and a long history of mining. Our employees are open to new ideas and looking for more all the time to make the mine more efficient.”

Dundee Precious Metals has spun off a subsidiary called Terrative Digital Solutions to manufacture and produce the hardware and software products for mine-wide connectivity. Symboticware, best known for its Symbot, a device that captures and transmits performance data from mobile equipment to enhance safety and productivity, made sense as its go-to-market partner because of the synergies between the two companies, said Howes.

Representatives of both Terrative Digital Solutions and Symboticware will be exhibiting in the Ontario pavilion at MINExpo, Booth 1423, North Hall.