Mine development picks up

Juniors starved for financing The optimism pulsing through the Metro Toronto Convention Centre at last year’s PDAC offered hope for an end to the long and painful mining industry downturn that began in 2013, but the final verdict on 2018 was one of d
0
Mar 4, 2019 3:49 PM By: Sudbury Mining Solutions Journal 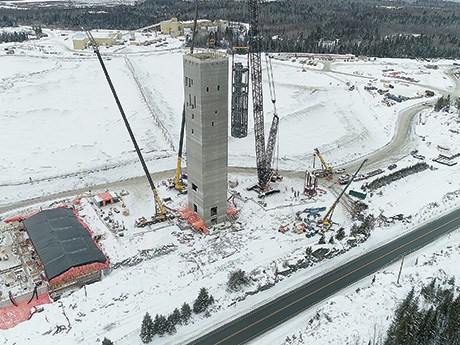 Construction of Kirkland Lake Gold’s number four shaft at the Macassa Mine in Kirkland Lake was preceded by the lowering of the Galloway by a 750-foot crane through the headframe to the collar. The shaft will descend to a depth of 5,450 feet and will begin hoisting ore in 2022. See Page 39.

The optimism pulsing through the Metro Toronto Convention Centre at last year’s PDAC offered hope for an end to the long and painful mining industry downturn that began in 2013, but the final verdict on 2018 was one of disappointment.
There were signs of recovery early in the year, but “the pendulum swings both ways, and we gave back a lot of the gains as the year progressed and commodity prices retreated,” said PDAC president Glenn Mullan.

Exploration expenditures in Ontario increased only marginally from C$539.7 million to C$567.5 million
The year was especially challenging for junior miners, who depend on public capital markets for financing, as weak commodity prices, investment apathy, cannabis, cryptocurrency and competition from other jurisdictions conspired against them.

Senior mining companies held their own, said Mullan, but “if you were trying to access capital to build a mine or continuing the late stages of exploration or feasibility, 2018 was a very difficult year.”

The numbers from Natural Resources Canada back him up. Exploration expenditures by junior mining companies actually fell from C$199.1 million in 2017 to C$172.1 million last year.

Canada has lost its reputation as the number one jurisdiction for attracting mining exploration capital to Australia, and Ontario has lost its standing as the number one jurisdiction in Canada to Quebec for the second year in a row. Quebec saw C$623.1 million in exploration and deposit appraisal expenditures in 2018, accounting for 26.4 per cent of total spending in Canada.

“Ontario has had its challenges with plans and permits,” said Mullan, while “Quebec is doing well because most of the treaties and land access issues there were resolved in the 1970s when Hydro Quebec built its massive James Bay project.”

Investments from the Caisse de Depots, Resource Quebec and Investissement Quebec have also made a difference.
But it’s not all doom and gloom. Nickel miners Vale and Glencore announced major mine development projects totalling $1.8 billion to cash in on the expected surge in demand from the battery electric market, Kirkland Lake Gold announced plans for a new shaft at its Macassa Mine, Harte Gold in White River declared commercial production and Goldcorp’s Borden project near Chapleau, touted as Canada’s first all-electric mine, is advancing toward production.

Harte Gold’s Sugar Mine achieved mill throughput of 575 tonnes per day and has applied for permits to increase that to 800 tonnes per day. The property has an indicated resource of 2.61 million tonnes grading 8.52 grams per tonne for 714,200 ounces of gold and an inferred resource of 3.59 million tonnes grading 6.59 grams of gold per tonne for 760,800 ounces. Results from a 100,000-metre drill program were scheduled to inform an updated resource estimate and mine plan this year. Located 60 kilometres east of Barrick Gold’s Williams Mine in Hemlo, the Harte Gold operation has a mine life of 12 years.

Elsewhere in Northwestern Ontario, North American Palladium’s (NAP) Lac des Iles Mine, 80 kilometres northwest of Thunder Bay, has powered back from near bankruptcy in 2013 thanks to skyrocketing palladium prices, new management and a new mine plan based on doubling underground production to 12,000 tonnes per day.

Mining contractor Redpath was hired to carry out 6,550 metres of lateral development and 560 metres of vertical development to access ore reserves in the upper mine beneath and around the perimeter of the dormant Roby open pit.
NAP’s adjusted earnings before interest, taxes, depreciation and amortization for the first nine months of 2018 were $103.6 million – more than double the $49.3 million recorded the previous year.

Palladium prices ended the year at $1,242 per ounce and surged past $1,400 for the first time in mid-January.

Work continued at Goldcorp’s Musselwhite Mine on a $90 million internal shaft that will accelerate the movement of ore from the underground crushers, cut down on haulage distances and increase production by 20 per cent. The fly-in operation is also pioneering remote operation of underground equipment from an operations centre in Thunder Bay, 500 kilometres to the south. Musselwhite produced 236,000 ounces of gold in 2017, but had not released production results for 2018 by press time.

Goldcorp’s Red Lake Complex expected to produce 235,000 ounces of gold this year, up from 209,000 ounces in 2017, and its contiguous Cochenour property is scheduled to come on stream this year, with anticipated production of between 30,000 and 50,000 ounces. The Red Lake Complex is aggressively deploying remote control operation of underground equipment, automation, and artificial intelligence for pinpointing exploration targets.

The environmental assessment for Greenstone Gold Mines’ Hardrock Project, a 50:50 joint venture of Premier Gold and Centerra Gold, was approved by the federal government in December. Provincial government approval was expected sometime in Q1 2019, but no timelines have been announced for a production decision. The Hardrock project is located in Geraldton, 275 kilometres northeast of Thunder Bay.

One exception to the scarcity of investment capital for greenfield exploration was Great Bear Resources, which raised $10 million in September, including $6 million from Rob McEwen and McEwen Mining and another $3.5 million in November. Located 25 kilometres from Red Lake, Great Bear Resources’ Dixie Project reported drill results of 1,602.73 grams per tonne gold over 0.70 metres and 190.78 g/t over 5.9 metres in January. A 30,000-metre drill program will continue through this year.

Also in the Red Lake district, Rubicon Minerals conducted a 35,629-tonne bulk sampling and test mining exercise to continue advancing and derisking its Phoenix gold project. The company, now under new management since suspending operations in 2015, expects to complete an updated resource estimate by June and follow up with a preliminary economic assessment. The infrastructure, including a 730-metre shaft, 9,000 metres of underground development, a mill, a tailings management facility, electric power supply, a substation, and a 200-person camp, is in place for a resumption of mining assuming management can overcome the complex geology problems that brought operations to a standstill.

Pure Gold, also in the Red Lake district, is scheduled to release a feasibility study this year to bring the former Madsen Mine back into production. The results of a 7,000-tonne test mining program completed in November “exceeded expectations with tonnes, grade and mining width greater than predicted from the resource model.” The current indicated resource estimate is 1,744,000 ounces at 8.7 g/t. The inferred resource totals 296,000 ounces at 7.9 g/t.

Further west, New Gold faced ballooning development costs and operational challenges at its Rainy River Mine, which declared commercial production in late 2017, prompting the divestment of its Peak Mine in Australia for $58 million and its Mesquite mine in California for $158 million. The divestments improved the company’s cash position, allowing it to focus on Rainy River and New Afton, its two remaining assets.

New Gold completed an updated life of mine plan and reported an impairment loss, net of tax, of $282 million in Q2. In September, it recruited Renaud Adams, formerly of Richmont Mines, as president and CEO.

The company reported improved performance at Rainy River in Q4 as gold production totaled 77,202 ounces, a 39 per cent increase over the prior quarter.

In the Ring of Fire, planning is underway for two access roads, but development of the region’s vast chromite and base metal deposits is still years away, although in an address to the Sudbury Chamber of Commerce January 23, Minister of Energy, Northern Development and Mines Greg Rickford reaffirmed the provincial government’s support for developing the region’s resources and promised that announcements would be made “in the very near future.”

Fifty kilometres west of Wawa, Wesdome Mines’ Eagle River and Mishi pit recorded production of 71,625 ounces of gold in 2018 – up from 58,980 ounces in 2017. According to company president Duncan Middlemiss, “production is up 50 per cent since 2015 and head grades have increased year over year.” Wesdome is projecting 2019 production of between 72,000 and 80,000 ounces, and planning for 114,000 metres of exploration drilling.

Alamos Gold’s Island Gold Mine, 83 kilometres northeast of Wawa, produced 105,800 ounces of gold in 2018 and plans to increase production to between 135,000 and 145,000 ounces this year. Lower cash costs, higher grades and higher throughout are projected thanks to the completion of a Phase 1 expansion project in September that increased permitted mill capacity to 1,100 tonnes per day.

Also in the Wawa area, Argonaut Gold received approval in January to proceed with its low-grade, open pit Magino gold project, although the company had not yet announced a date for the start of construction.

Despite sluggish nickel prices, both Glencore and Vale are freeing up cash to prepare for an expected increase in demand for battery-grade Class 1 nickel. McKinsey estimates that annual electric vehicle production will reach 31 million units by 2025, increasing expected demand for high-purity nickel from 33 kt in 2017 to 570 kt in six years.

Vale is proceeding with a C$760 million phase one development of its Copper Cliff Deep project, and Glencore is moving ahead with a US$700 million development of Onaping Depth. Vale is refurbishing its Copper Cliff South Shaft, which was mothballed in 2008. The steel in the shaft is being stripped out and replaced, the headframe, loading pocket and dumping systems are being reconfigured and both hoists are being replaced. In addition, the coarse ore handling system and crusher station at the 4,000-foot level are being rehabilitated and the ore and waste handling systems, including all conveyances, bins and ore passes are being refurbished.

Glencore’s US$700 million project includes the construction of a winze from the 1,200-metre level laterally off the workings of Craig Mine to access some 14 million tonnes of ore 2,500 metres from surface. First production from Onaping Depth will occur in 2023 and full production by 2025. Because of the heat at depth, Glencore has committed to an all-electric operation.

In December, the two companies agreed to do a joint feasibility study to explore the possibility of developing ore resources at depth from the existing workings of Glencore’s Nickel Rim South Mine. The targeted resource includes Vale’s Victor property and a deposit straddling the boundary between Vale and Glencore properties.

Polish-owned KGHM International, the third and smallest player in the Sudbury camp, is less optimistic about the nickel market at least in the short term, announcing in January that it was putting its Morrison deposit on care and maintenance due to low nickel prices.

See story on Timmins area exploration and mine development here.

Kirkland Lake Gold had a banner year, producing a record 240,126 ounces of gold from the Macassa Mine, up from 194,237 ounces in 2017, and another 126,403 ounces from its Taylor and Holt operations. Its high-grade Fosterville Mine in Australia also outperformed, producing 356,230 ounces, accounting for total of 723,477 ounces.

With the completion of the #4 shaft in 2022 (See story on Page 39), Macassa is poised to achieve substantial production growth, increasing total ounces from all Kirkland Lake Gold operations to the one million ounce mark.

“Maybe it’s wishful thinking, but I’m hopeful that it’s a trend that will continue and that financings will echo that.”