Consortium considers trial After 30 or more years of aborted efforts to replace drill and blast technology with mechanical cutting in hard rock mining, the industry may be on the cusp of a breakthrough.
0
May 17, 2018 10:44 AM By: Sudbury Mining Solutions Journal 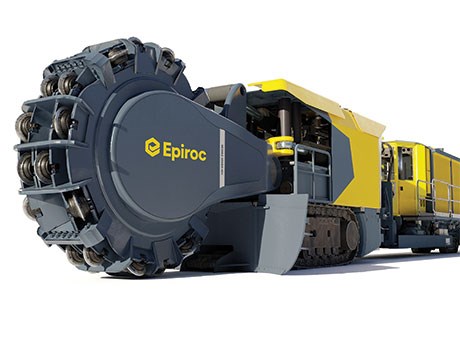 Epiroc’s Mobile Miner 40V, designed for ore production in narrow vein mines and an advance rate of 12 metres per day, has been purchased by Hecla Mining for its Lucky Friday Mine in Idaho and is the mechanical cutter most likely to be trialed by a consortium that includes Agnico Eagle.

After 30 or more years of aborted efforts to replace drill and blast technology with mechanical cutting in hard rock mining, the industry may be on the cusp of a breakthrough.

Hecla Mining has ordered one for its Lucky Friday Mine in Idaho, and “four or five” mining companies in Ontario and Quebec, including Agnico Eagle, have come together as a consortium to consider a trial of mechanical cutting technology.

Epiroc’s three mechanical cutters include the 40V which will be going to Lucky Friday, the 22H, which has been trialed by Anglo American as part of its Future Smart technologies program in South Africa, and the 55V, which was developed for Rio Tinto, but has since been purchased by Swedish contractor Bergteamet AB to develop a research tunnel at SKB’s test facility at Apso, Sweden.

The 22H began trials in 2016 at Anglo American’s mine in Twickenham, South Africa, a low reef platinum orebody “and will now go into a production phase,” said Epiroc global communications manager Ann-Sofie Andersson in an email exchange. The machine, designed for both development and ore extraction in low profile tunnels of 2.2 to 3 metres in height and up to 5.7 metres in width, is 24 metres in length, 2.0 metres high and 4.2 metres wide.

The 40V, scheduled for delivery to Hecla Mining early next year, is designed for ore production in narrow vein mines and is capable of an advance rate of 12 metres per day, while the 55V, Epiroc’s largest cutter, can excavate tunnels of 5.5 by 5.5 metres.

According to Andersson, the Mobile Miners are designed to cut hard rock of up to 230 MPa and even higher, although at decreased penetration rates.

“Our rock is around 200 to 250 MPa, but very little is at the high end, so these machines should have no problem at all cutting (in the Canadian Shield),” said Doug Morrison, president and CEO of the Centre for Excellence in Mining Innovation.

“I’m pretty confident that these machines can now cut the hard rock that we have here. I think a lot of progress has been made and that mechanical cutting does have a role to play.

“If you want to do what these machines are designed to do, which is to drive long, straight tunnels from one orebody to the next, then they’ll be very effective at doing that.”

However, Morrison cautions that it may be necessary to change our mine design layouts to accommodate mechanical cutting.

“We have an awful lot of corners, and while they have some capacity for curves, they don’t do corners particularly well, so we would have to rely on many more straight lines.”

The overriding interest in mechanical cutting, of course, is to speed up advance rates.

“Some of these cutting machines can do 15 metres a day and there’s no blasting technology that I can come up with that will achieve that.”

According to Morrison, the 40V Mobile Miner for narrow vein mines probably has the most potential for hard rock mines.

The 55V, designed for larger base metal mines, has more limitations than the 40V in terms of turning radius, size and maneuverability, and could present more of a challenge.

A demonstration of mechanical cutting technology was included in the recent failed application by CEMI and CMIC for federal government Supercluster funding, said Morrison, but Agnico Eagle and other mining companies, including Vale and Glencore, are continuing to pursue a trial themselves.

Mechanical cutting offers hard rock miners several advantages. More precise cutting allows for better tunnel quality with little to no overbreak or underbreak. It also allows for continuous mining and faster advance rates because there’s no need to pause for blasting and the clearance of blast gases.

The machines use “steel disc ring-rolling cutters on the circumference of a wheel, or cutter head, to crack and fracture the rock so it can be transported via a conveyor to the back of the machine,” explained Andersson. “The cutter head is suspended on a boom with a horizontal rotating axis so the cutters can roll with vertical kerfs. The Mobile Miner,” she continued,” is a partial face machine, which requires the cutter head to be repositioned to be able to excavate the entire tunnel face.”

The machines can also be configured to accommodate the simultaneous installation of roof support and the application of shotcrete.

One or two operators run the Mobile Miner depending on whether rock support functions are added to the machine, but plans are underway to introduce remote operating capability.