ATV is designed for extreme conditions Felix Lopes has Sherp fever, and he’s betting his fervour for the rugged all-terrain vehicle (ATV) will catch on amongst industry types throughout Ontario.
0
Nov 6, 2017 3:03 PM By: Sudbury Mining Solutions Journal 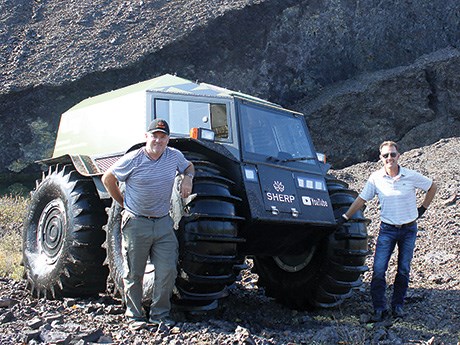 ATV is designed for extreme conditions

Felix Lopes has Sherp fever, and he’s betting his fervour for the rugged all-terrain vehicle (ATV) will catch on amongst industry types throughout Ontario.

In September, Lopes’ Sudbury company, Coniston Industrial Park, became the exclusive Ontario distributor for the Sherp, a rugged, amphibious ATV designed to traverse any terrain in extreme conditions. From rock to muskeg, sand to ice, the Sherp has passed all tests for durability and performance.

Comprised of an aluminum body, the Ukraine-made behemoth is as tall as it is wide (eight feet), measures 11 feet long,
and weighs in at 3,000 pounds. It’s been outfitted with a Kubota engine and a five-speed manual transmission, and can reach a top speed of 40 kilometres per hour.

Its diesel fuel tank has a 60-litre capacity, and the machine burns two to three litres per hour, which Lopes said could comfortably allow it to travel 800 kilometres on one fillup. Each of the wheel hubs houses an additional 50-litre fuel reserve, extending the running time to 3,600 kilometres.

Part of its versatility lies in the tires, which seemingly float atop the terrain. Tubeless, the tires’ pressure can be adjusted by inflating or deflating them according to conditions. A chart mounted inside the ATV offers a guide indicating pressure requirements for various topographies. It can climb over obstacles as high as one metre and at a gradient of up to 35 degrees.

“It won’t get stuck anywhere,” Lopes said. “It’s an off-road ATV on steroids.”

Lopes first came across the Sherp when he was looking for a fun, new toy he could play with on weekends. But after a demonstration of the vehicle’s capabilities, he was so impressed, he approached Sherp management to become the vehicle’s Ontario distributor. Company brass travelled to Coniston to tour his facility, and a deal was struck.

Coniston Industrial Park will sell, rent and service the vehicles from its shop in Sudbury, in addition to manufacturing the aluminum trailers to transport them. One of Lopes’ mechanics travelled to Ukraine in October for seven days of training on Sherp maintenance.

His company now becomes only the third distributor in Canada; the others are in Winnipeg, which serves as the North American headquarters, and in Québec.

Retailing for US$106,000, the Sherp is probably a little too pricey for even the most dedicated weekend warriors. But it’s the potential benefits to industry that have Lopes really excited.

“I’m very passionate about this because I see this being an opportunity for a lot of commercial applications,” he said.
Mineral exploration, surveying, pipeline inspection, search and rescue, hydro line inspection, and even science expeditions: they all require travel to destinations that are remote, rugged and difficult to access.

During seasonal transitions, Lopes noted, personnel often have to wait for water to thaw or freeze before traversing into remote areas, causing companies to lose between 10 and 12 weeks of a season.

But because the Sherp is amphibious, it’s possible to have access through the year and zero downtime as a result.

“You could cross these conditions that are temporarily closed,” Lopes said. “With this unit, you could literally break through the ice and climb back on.”

While there are already several makes of all-terrain vehicle available on the market, Lopes claims the Sherp stands out for its reliability, requires less maintenance, and puts the health and safety of personnel first.

“You want to get to the job, get it done, and carry as much load as you can. This is the machine to do your job, comfortably and safely.”

The vehicle accommodates two passengers up front and six in the back, or the back compartment can be used to hold equipment. The ATV can be driven directly onto its trailer, and the trailers can be hauled by a pickup truck.

As winter approaches, Lopes is eager to test the Sherp against Northern Ontario’s cold, snowy conditions. But being built in Ukraine, he’s confident about its performance, and defies anyone not to get excited about the boundless potential this vehicle offers.

“Once you ride this,” he grins, “you have Sherp fever.”