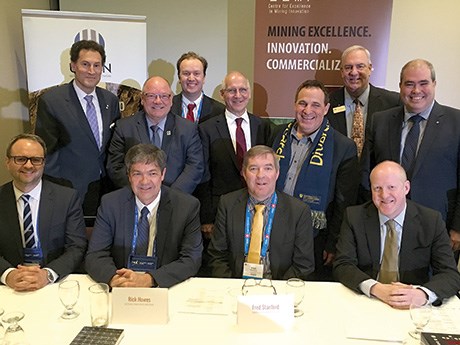 Steve Paikin: What are the most pressing technology problems facing the underground mining industry?

Zach Mayer: At Kidd, we’ve done a lot over the last four or five years…We have autonomous loaders and Canada’s largest ventilation-on-demand system. We have wireless communication, proximity warning, collision avoidance and super sophisticated geotechnical modelling. From my perspective, the hardest thing is just selling the idea of why we need to put all this stuff in, what it’s going to do for us. Coming up with a business case has always been a challenge. Luckily, we have the right people in the right places who understand the KPIs we’re going after.

Rick Howes: It always comes down to people and whether the desire and the interest are there to change and improve. If you’re doing these technology things, the first thing you have to do is get those who are on the front line of the organization to become part of the solution and help to make it happen.

Fred Stanford: For some reason, we drop ore into ore passes and think we’re using gravity, but actually we’re wasting gravity. We drop the ore to the bottom of the mine and then we use a lot of power to lift it up again. We have a mine that’s 400 metres above the processing plant. We could have put in an ore pass, dropped it down through the mountain and driven a tunnel into the side of the mountain to get it, but we chose not to. We use a new technology called a rope conveyor that uses the potential energy of the gravity and actually generates close to a megawatt of power. It makes our ore transport cost negative. We actually make money moving our ore.

Steve Paikin: There’s this saying that culture eats strategy for breakfast. What do you do to change the culture to help provide solutions?

Fred Stanford: People take a huge amount of their identity from their work and if you can make their work better and more efficient, they generally appreciate that. If you map the process and they see where the issues are, then people generally don’t resist change…if you can engage them in designing the solution, they won’t be resistant to it. Everyone has rational self-interest and if the change you make is counter to that, then it’s best if you know that ahead of time and make some alternate arrangements so their life is better, not worse as a result of the change.

Zach Mayer: We have four robotic scoops driving around in the mine. We put together a slide deck (for our miners) early on designed to answer the question, what’s in it for me. It explained how there would be fewer delays, more productive face time and that it should result in a larger pay cheque in their pocket.

Conor Spollen: You also need to change the views of the higher ups. The accountants need to understand what your challenges are. We can’t just leave it to the workers. We have to work on the executive management, the legal and finance people.

Steve Paikin: If you had a cheque for $100 million and had to use it for innovation, what would you spend it on?

Fred Stanford: I would look very hard at shrinking the size of our drifts underground and transforming ore transport from short, wide and tall trucks to long, skinny and narrow vehicles…conveyors. If we could do it long and skinny and put it back on rails, we could automate it.

Zach Mayer: We hoist about 2.2 million tonnes per year from a depth of close to three kilometres at 13.9 tonnes at a time. It takes about 167 seconds to cycle those 13.9 tonnes out of the mine. The whole (process) of developing toward your stope and extracting the tonnes one 10-tonne bucket at a time is just inherently unproductive.

Conor Spollen: We spent $70 million putting material on a (rail-veyor)…as Fred suggested. It was a great idea…but we couldn’t get the economics of it to work in the end.

Rick Howes: I was very pleased to see Cementation win the grand prize at Disrupt Mining with their brilliant idea of hydraulic hoisting. That’s transformative for the industry. I would put my money on that… I’m a Northern Ontario boy. I spent most of my career in Northern Ontario and I see how far we’re spreading our influence globally. Fred works in Mexico. I work in Europe and Africa. These ideas spawn out of Northern Ontario. Give me $100 million and I’ll put it back into CEMI.

Steve Paikin: How much time do you spend on technology?

Conor Spollen: Day-to-day activity of running a business and trying to be as efficient as possible with existing processes (takes up 99 per cent of our time). We have a small technical group in Sudbury and the Toronto area trying to work on process improvements, but 99 per cent of our time is executing what we currently have in place rather than trying to look for a different way of doing it.

Zach Mayer: Our focus now is on squeezing all the value out of the technology we’ve implemented. A lot of the things were built in silos and there’s a lot of opportunity to try to combine these systems, make them talk to each other, so we can use our tracking system not only for emergency response and ventilation, but also for productivity enhancement.

Fred Stanford: I have a superb team that runs the mine. That allows me to spend more time in the future. I spend 25 to 40 per cent of my time on processes and technology. My team runs this mine. My job is to think through the next one, so when we build it, it’s as efficient as it can possibly be.

Steve Paikin: What are your thoughts about autonomous operation of equipment?

Zach Mayer: We’re closer than some given the stuff we have. There’s a lot of value looking outside of mining. We need to look at other industries and emulate what’s going on there rather than reinvent the wheel.

Fred Stanford: I don’t believe we’ll ever be successful automating rubber tire equipment. The fatal flaw is the need to steer it. We have hard rock that’s very close, we have people who are quite soft and we don’t have GPS, so all the automated equipment now has to operate without people in the area. I think the only way to automate transportation underground is to put it on rails so you don’t have to steer it. I don’t know if the rails are on the ground or on the back (as would be the case) for a monorail, but I believe automation will be achieved much more quickly if we put it on rail. Our next mine has that design built into it.

Rick Howes: Automation is a natural evolution. It will come. If you can have driverless vehicles running around on roads, surely you can have a driverless machine underground. I think it’s coming. It’s just a matter of catching up with the rest of the world.

Conor Spollen: I think it’s more likely that we’ll see semi-autonomous (technology) in some parts of our mines – particularly for load-haul-dump equipment hauling from stope to ore pass. Autonomous transport of ore would have a social impact because we would have to lay off loads of workers. It’s a long journey to get to fully autonomous mining.

Steve Paikin: What advice do you have for technology developers?

Zach Mayer: I learn about new technologies from trade shows, conferences and different journals. We have a pretty open door policy about talking to just about anybody. If at the end of the day it makes sense and there’s a business case, we’re quite progressive about giving it a shot.

Fred Stanford: We map our processes and once we know where the bottlenecks are, we go looking for a solution. If someone comes in the door with a product that doesn’t touch on our bottlenecks, we’re not likely to spend much time on it. Technology developers have to focus on a mine’s issues and they have to do it with numbers. If you have a good technology solution, get your solution to pop up on Google.

Conor Spollen: We don’t spend time chasing solutions and don’t have an open door, but we work with CEMI.

Steve Paikin: How do you handle the risks associated with new technology?

Fred Stanford: Miners get criticized for not being innovative, and we get compared to the oil industry all the time. Mining is a linear series of processes and in general it doesn’t cost less than $1 billion to build a mine. The most expensive piece might be $30 million, but if it doesn’t work, the whole $1 billion is useless. That’s a bit intimidating. You have to have a plan, a backup plan and an escape plan if it doesn’t work because you can’t blow $1 billion unless you’re very close to the end of your career.

Rick Howes: You can reduce risk through partnerships and collaboration. There is a need in the industry for an organization like CEMI to take some of the risks away from the mining companies and advance ideas to a state where they can be implemented with some confidence.

Conor Spollen: Risk reduction is a priority for us. We’re not in a position to take massive risks. We have to be much more conservative, so I agree that collaboration and working with CEMI is the way to go.

Steve Paikin: Metal prices are down and companies are struggling. How do you keep innovation alive and make it a priority?

Rick Howes: You don’t have a choice. If you want to stay in the mining business, you have to be able to get better. We’re going deeper and we’re dealing with lower grades, so we have to innovate and get more efficient. It’s a necessity, not an option.

Fred Stanford: Investors are scared silly of innovation. We put in a rope conveyor and I got beat up for four years by investors over this risk because it was unknown to them. They said ‘you only have one of them.’ I said, yes, but we only have one crusher, one SAG mill, one ball mill. I only have one of a lot of things. We just pushed ahead and did it. We’re at the stage now where we earned credibility and we delivered what we said we were going to do. The technology works beautifully. If you deliver, they’ll give you the latitude to keep doing it. You don’t win by standing still.