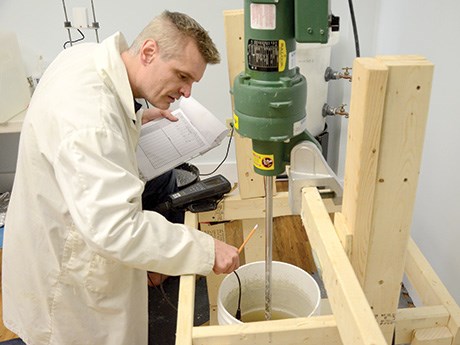 Bio-Mine Ltd., one of five finalists in the Disrupt Mining competition held March 5th in Toronto, is proposing to build the world’s first bio-simulation plant in Sudbury.

The proposed 50,000 to 75,000-square-foot, climate-controlled facility would be used to test the use of micro-organisms in the pre-treatment, recovery and remediation of ore and mine waste material.

“Currently, companies are going from testing 100 kg batches of material in the lab directly to minesite applications and failing. We want to provide that intermediate step. We can run material through it and produce feasibility studies that will tell you exactly what you’re going to get. We don’t want to have to go all over the world to minesites for pilots. It’s easier and more economical to do it in one location.”

A discovery made by Dr. Vasu Appanna 12 or 13 years ago led to the development of Bio-Mine’s dynamic bio-technology solution. Appanna, a Laurentian University professor, former dean of science and engineering and Bio-Mine co-founder, discovered deep down in a tailings pond in the middle of winter in Northern Ontario a micro-organism that had adapted and learned to survive in the harsh environment.

Vanwallegham won’t identify the organism except to say it’s a member of the eukaryote family, a micro-organism whose cells have a nucleus and other organelles enclosed within membranes. Bacteria, by contrast, are classified as prokaryotes and lack a membrane-bound nucleus, mitochondria or any other membrane-bound organelles.

The eukaryote discovered by Appanna is described by Vanwallegham as an “environmental super soldier” superior to all current biotechnology recovery and remediation technologies.

“Everybody in the world has been doing bio-mining using bacteria which eat one type of rock, and are capable of one single metabolism in one environment or they die.”

Eukayotes, by comparison, “are able to mutate or augment their internal metabolism depending on what they are given for food…they’re not affected by the environment. They’re able to withstand all kinds of temperatures, pH levels and can function with or without oxygen.”

According to Vanwallegham, Dr. Appanna learned “we can program them for the material and environment by adjusting a recipe of nutrients, catalysts and specific carbon sources. We give them the tools they need to enter into the minerology and perform the necessary chemistry, reducing the time they take to learn and adapt on their own.”

They can also be genetically manipulated.

Bacteria can’t adapt or be programmed.

“I heard a story at the Disrupt Mining after party about a mining company in Chile that uses bacteria in massive heap leaches,” said Vanwallegham. “One night the temperature dropped and all the bacteria died. Imagine a mining company investing hundreds of millions of dollars in these heaps only to come back the next day and find the bacteria dead. (Our micro-organisms) don’t die if the temperature drops. They continue to work. They adapt. They learn.”

Bio-Mine has already signed up a big gold mining company – Vanwallegham won’t divulge its identity – and concluded a deal with Integra Gold to test its technology at a gold mine the company is developing in Quebec.

“What we’re doing is very special and it was eventually going to get out to the level that it is now,” said Vanwallegham.

“We’re just three years ahead of schedule because of (all the publicity resulting from the Disrupt Mining event).”

Every orebody is different, so Bio-Mine begins every engagement by sitting down with the customer and finding out what their goals are.

“Are we just remediating or are we also recovering. And what are we recovering? Copper? Nickel? Zinc? Gold? Once we have that, we take the material and do a very detailed analysis of it. We need a blueprint of every single rock particle. Then we start to program.”

One application is the eradication or neutralization of cyanide. Another is the prevention of acid mine drainage from tailings ponds.

The ultimate goal is zero waste and the elimination of tailings ponds, but that will take time for the technology to mature, said Vanwallegham.

The focus now for Bio-Mine is to work with new mines and introduce a circuit to remediate waste before it’s discharged.