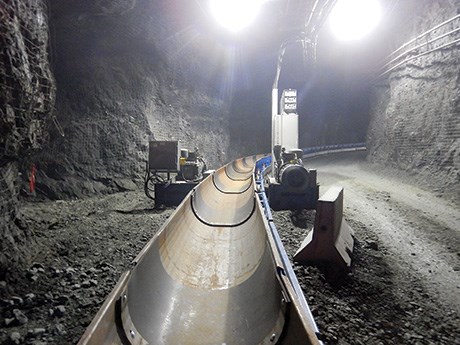 The Goldex rail-veyor is a remote controlled, electrically powered light rail haulage solution propelled by foam-filled tires at drive stations located at intervals along the three-kilometre track, which begins at the 1,250 metre-level below surface and ends at the 730-metre level.

The first, full-scale underground deployment of a rail-veyor material handling system in North America has been commissioned at Agnico-Eagle’s Goldex mine in northwestern Quebec.

Sudbury-based rail-veyor Technologies Global Inc. has been working hard to commercialize the technology since acquiring distribution rights from inventor Michael Dibble in 2006.

The company entered into a joint venture with Vale to build a fully-operational, 730-metre surface demonstration track at the Frood-Stobie Complex in Sudbury in 2008 and supplied a 2,500-foot track and 700-foot dumping loop at Vale’s 114 Orebody in 2011 to test the rail-veyor in a production environment.

Vale lost interest in the technology, but Rail-Veyor soldiered on, convinced it had a role to play as an innovative material handling solution.

The sale to Agnico-Eagle, finalized in early 2016, provides the company with an ore handling system for its Deep 1 Zone, which lies below shaft bottom.

In a presentation at the Canadian Institute of Mining and Metallurgy’s 2017 convention May 1 in Montreal, Goldex assistant superintendent Christian Lessard said the rail-veyor option won out over several other potential solutions, including a winz, a truck fleet and a series of conveyors.

A truck fleet was deemed too expensive, a winz would take too long to construct and conveyors lacked the flexibility to be confined to areas of stable ground conditions.

The rail-veyor is a remote controlled, electrically powered light rail haulage solution propelled by foam-filled tires at drive stations located at intervals along the track. The tires provide the forward thrust by turning against the cars’ side plates.
The three-kilometre track begins at the 1,250 metre-level below surface and ends at the 730-metre level.

Ore is dumped into a grizzly with openings of 18-inches by18-inches and there’s a rockbreaker room at the 1,150-metre level to handle oversize. A vibrating feeder feeds the material to the rail-veyor cars, depositing the fines first to avoid damage to the troughs.

The rail-veyor runs in a dedicated ramp with a grade of 17 per cent and is equipped with access control to keep personnel out of harm’s way.

The ramp is of standard width because it was excavated using the mine’s existing fleet of 45-tonne trucks and 15-yard scoops.

“If we had gone narrower, we wouldn’t have been able to use our equipment, so it was economical to keep the standard drift dimensions,” said Lessard. A separate ramp is used for equipment and personnel.

A 360-degree unloading loop inverts the cars, causing the ore to drop into a silo. From there it goes to a crusher and an ore handling system before being skipped to surface.

Goldex has six trains with 68 cars per train, five bypasses and 90 drive stations.

The rail-veyor can transport 600 tonnes per hour with each train holding 63 tonnes of material.

A risk assessment conducted by Agnico-Eagle found the rail-veyor solution to be safer than alternative modes of transport. The dedicated, restricted access ramp minimizes the danger of workers coming into contact with mobile equipment, while the elimination of trucks for haulage means no exhaust and no greenhouse gas emissions.

“The main risk associated with the rail-veyor is a train going out of control down the ramp,” said Lessard. To counter the risk, there are two braking systems, including a spring-applied hydraulic release emergency braking system integrated with the drive stations.

There are always four drive stations in contact with a train and many others at rest waiting to catch a train in the unlikely event that one or more are deficient.

“It takes guts to be the first to deploy a new technology,” said Lessard. “The company took a chance, but it’s a great project, and it’s going very smoothly. We didn’t have any major issues during the commissioning.

“If you want to implement new technology into your mine, everyone has to be open-minded to change. The rail-veyor has significant advantages over the alternatives in terms of health and safety, industrial hygiene and sustainable development.”

Earlier this year, Rail-Veyor Technologies also announced the sale of a system for surface haulage in Venezuela.