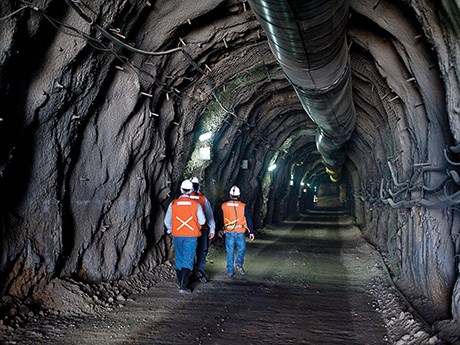 A new exploration tool called IBM Exploration with Watson that uses artificial intelligence (AI) appears to work well, but the specifics of exactly how well it works may remain a trade secret. The three-year “co-authorship” between IBM Canada and Goldcorp developed technology that uses AI to better pinpoint orebodies at its Red Lake gold mine. The goal was to reduce exploration costs by using a wealth of already-available exploration data to better predict the location of orebodies.

At the heart of the project is IBM’s Watson technology, a more mature version of the Watson that won Jeopardy! against human opponents in 2011. Since that competition, IBM has developed Watson to become a decision support tool in a number of different industries including mining, health care, and oil and gas. Watson can gather information from potentially millions of data sources and extrapolate the data to make informed conclusions that would take humans years to make – if ever.

For example, IBM Watson Health can help oncologists diagnose and treat rare cancers by accessing data from sources that individual doctors may not even know exist. The system can also find the latest treatment methods and even suggest personalized care models based on the patient’s type of cancer, disease location, and the patient’s own medical history to provide decision support for optimizing treatment plans.

IBM Exploration with Watson works in a similar way to pinpoint new orebodies by collecting and evaluating exploration data.

Mark Fawcett, a partner at IBM Global Services, said that the first step was to collect all that data in one central database.

“We took all the data from 80 years of exploration – all their drill data, all their geological data – and built a repository,” Fawcett said. Much of the data collected over such a long period of time obviously wasn’t digital. “We even took a bunch of their hand-drawn maps and were able to interpret them and pick up strikes and depths, and be able to feed that in as additional data sources into the repository.”

Once the repository was built, Goldcorp tested the system by doing a geological workup to determine a potential target.

Using Goldcorp’s traditional methods, it took 156 hours to complete the workup. With Watson, it took just four and a half hours.

“It’s a substantial reduction in time and effort to get the data geologists need,” Fawcett said.

The real test was using that data to improve gold exploration accuracy and efficiency. This research took two tracks: one that chose drill targets within a known area and one within a greenfield exploration area.

“The results were pretty positive,” Fawcett said, though Goldcorp has not released numbers or described precisely how Watson improved orebody targeting. “Goldcorp has been pretty quiet about what the core samples look like, and I respect that. But, we know they’re happy.”

What is public knowledge is that Watson helped identify nine drill targets in the greenfield area, three of which were drilled in late 2018. Fawcett said one of the drill holes “absolutely” wouldn’t have been drilled if Watson hadn’t identified the target. “It was in a different geological slope and it was in a different area,” Fawcett said. “It took a drill result from 21 years ago that nobody had looked at before and used that as the basis for the determination that there might be something there.”

Follow up drilling on the three targets is scheduled, as is drilling of the six other targets Watson found.

Fawcett said that Goldcorp plans to roll out Watson to all its other mines. He also said that other mining companies are “actively engaged” in discussions to use the technology, though no names have been announced.

It’s not a plug-and-play system since Watson has to “learn” all the data points of a new mine first. However, it will take Watson less time to start getting results now that the basic groundwork with the software has been done.

“It will learn faster – it’s not a wholesale redevelopment. There would be a refinement or a tuning of the algorithms that we would need to work with at other mines and other mineral types. Once that’s done, then the learning process begins (with each project’s unique exploration data) and it starts to evolve on its own.”

There are other opportunities for improvement. For example, there are some datasets that IBM Exploration with Watson can’t process such as geophysical information, though IBM is working on that. “We’re having a lot of companies come to us saying that they want to add geophysical information into it,” Fawcett said.

Also, the current system specializes in gold exploration. Future iterations will be developed to target other minerals as well.