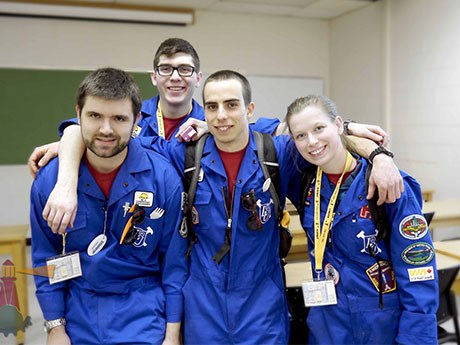 It’s easy enough to illustrate the amazing growth of Laurentian University’s Bharti School of Engineering with a recitation of its skyrocketing enrollment numbers, but nothing speaks to the school’s stature as an academic powerhouse as eloquently as the awards its junior and senior teams took home from the 2015 Canadian Engineering Competition in March.

When the junior team won top honours at the Ontario Engineering Competition in February and the senior team came in second, both qualified to represent Ontario at the national competition at Memorial University in St. John’s.

“It was the first time that a university sent two teams to the competition and both won first prize,” said Bharti School director Dr. Ramesh Subramanian.

“It’s amazing how far we’ve come. We just had our iron ring ceremony and we had close to 90 students graduating. Less than 10 years ago, we had fewer than 15.”

The school has seen enrollment increases of 25 to 30 per cent in each of the last four years and currently has a total of close to 700 students – 625 at the undergraduate level, and between 50 and 55 Masters and PhD students.

There are 25 faculty members, including seven in mechanical, seven in chemical, eight or nine in mining and a couple in civil.

Mining profs are the most difficult to recruit because there aren’t very many PhDs coming out of Canada, said Subramanian.

Pay scales in industry are so good for mining engineers that most students forgo graduate degrees and embark on a career in industry at the earliest opportunity, forcing mining schools to recruit overseas.

The school’s growing stature is attributable in part to the generosity of Stan Bharti, chairman and CEO of merchant banker Forbes & Manhattan, and Ned Goodman, CEO of Toronto-based Dundee Corporation.

Bharti, who moved to Sudbury to join Falconbridge in 1978 and called the city home until 1995, gave the school a $10 million endowment in November 2011 to fund scholarships, field trips, faculty recruitment and improvements to classooms and labs. The following year, Laurentian named its School of Mines in honour of Goodman, a Canadian Mining Hall of Fame inductee and industry power broker, in recognition of a $20 million endowment to support the development of new courses and programs, enhance the learning environment, fund scholarships and assist with student recruitment.

“It will take until 2021 to see the full impact of the these endowments, but we’re already seeing a difference because anytime there’s a brand name associated with a school, people start to take it seriously. In the three and a half years since November 2011, the school’s reputation has reached new heights,” said Subramanian.

“In mining engineering, we’re definitely in the top two or three of the nine or 10 mining schools in
Canada.”

Other more established and well-endowed schools like the University of Toronto and Queen’s University have been around a lot longer and the grade average of students entering their programs may be higher, but the real test of a program is what the students learn and how they perform during their time in school, he said.

“Our students have won the Canadian University Mining Games more times than any other school – eight times since 1994.”

The Goodman School of Mines immerses students in Canada’s premier mining camp, which boasts 14 active mines in a 50-kilometre radius, not to mention several research institutions and the country’s largest cluster of mining supply and service companies.

“Where else in the world can you find that?” asked Subramanian.

Future plans include an expansion of the current two-year Civil Engineering program, but with so many more students to accommodate, the school’s Fraser Building has run out of space.

“The Board of Governors passed a motion in October for a new research, innovation and engineering building on campus, but how long that’s going to take is anyone’s guess,” said Subramanian.

A new home for the School of Engineering would require a fundraising campaign of between $75 and
$100 million.

A chemical engineer with a PhD from the University of New Brunswick, Subramanian joined Lauerntian in 2002 at a time when enrollment was down and there was talk about shutting down the school.

“Now,” he said, “we’re one of the most successful programs on
campus.”

CIM forms partnership with Beyond Digital Transformation event which is moving to a new venue
Dec 19, 2019 11:57 AM