They’re smart, eager to learn and make their mark in the mining industry. Meet Donna, Carolyn and Sadie, pioneers of gender diversity and students at Laurentian University’s Goodman School of Mining.
Nov 26, 2013 10:21 AM By: Sudbury Mining Solutions Journal 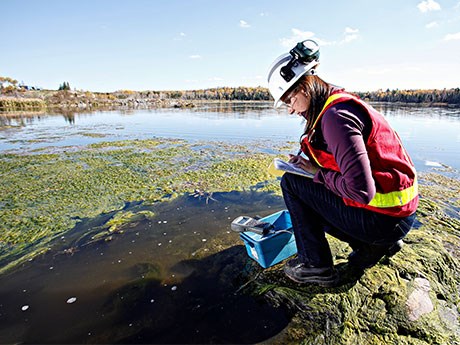 They’re smart, eager to learn and make their mark in the mining industry. Meet Donna, Carolyn and Sadie, pioneers of gender diversity and students at Laurentian University’s Goodman School of Mining.

Sadie Bechamp, a fourth year mining engineering student, started off at the other end of the academic spectrum as a performing arts student and budding saxophonist at Sudbury Secondary School.

“By the time I was graduating from high school, a lot of the guys I was friends with were starting to explore the mining industry for jobs, things like the trades,” she said. “I knew I didn’t want to be a tradesperson, but we had a career fair and I learned about all the opportunities in engineering, especially mining engineering.”

A co-op student, Sadie has had two placements – a four-month stint with MIRARCO Mining Innovation and a 16-month placement with Vale. She worked at Coleman Mine for a year on the 170 Orebody project and then transferred to Totten Mine, where she worked in the shaft construction department.

“You always hear that if you’re a woman in the mining industry, they’ll give you a hard time, but I didn’t have any bad experiences at all,” she said. “Once I showed an interest, (my co-workers) were incredible.”

Sadie expects to have her fair share of challenges when she enters an engineer-in-training program and gets to experience work at the face. “I’m pretty sure a jackleg will weigh more than me, but it’s really crucial to understanding the mining cycle and the issues miners encounter,” she said.

Born and raised in Sudbury, Sadie’s interest in the mining industry was understandable, but Carolyn Gummer, a third year mining engineering student, hails from Ajax, Ontario, 48 kilometres east of Toronto.

Carolyn was always interested in math and sciences and was encouraged by her parents to go into engineering. She started in general engineering at St. Francis Xavier University in Antigonish, Nova Scotia, and settled on mining engineering because of her interest in travel and geology.

She switched to Laurentian’s Goodman School of Mines because “Sudbury is the heart of mining and was the best option. You can go underground on field trips, the classes are small and the profs are always available.”

Donna Cortolezzis is the veteran of the trio with a resumé as long as your arm. A PhD student doing research on mining-induced seismicity,

Donna has undergraduate degrees in Chemistry from the University of British Columbia and a Mining Engineering degree from Queen’s University. She spent two summers working underground as a miner at the Williams Mine in the Hemlo camp in the late ’80s, worked at the Geco Mine in Manitouwadge as a supervisor and in the engineering department from 1991 to 1995 and spent four years at the Holloway Mine east of Timmins, where she did everything from ventilation to environmental sampling, layouts, design and scheduling.

“In the late ’80s and early ’90s, I was pretty much the only woman,” said Donna. “It was very rare to see a woman underground or in the engineering office, but now when I go to sites, there are more women.

“Initially, it was harder, for sure. Many of the guys had never worked with a woman, but after they got to know you, they respect you and like having the diversity in the crew. It made it more fun and enjoyable.”

Donna relocated to Winnipeg in 2000 to start her own business, but returned to Ontario in 2004 when her husband landed a job in Sudbury as part of the Nickel Rim project team. She worked for McIntosh Engineering doing feasibility studies for Inco and subsequently joined Vale as chief engineer at Stobie Mine.

Along the way, she found time to raise two children, a daughter in third year university and a son who is still in high school, but showing an interest in mechanical engineering.

Donna left Vale in 2010 and enrolled in a Masters program at Laurentian last year. Based on her marks and the level of research she was doing, she was given permission to switch directly into a PhD program.

Grateful for the career and the opportunities the mining industry has given her, Donna is giving back by heading up Laurentian’s Go Eng Girl program, which brings together 50 female high school students and their parents to spend a day learning about the opportunities in engineering.

CIM forms partnership with Beyond Digital Transformation event which is moving to a new venue
Dec 19, 2019 11:57 AM